Returning home from Mushroaming Tibet, I made a dream come true. For years I have been looking for bioluminescent mushrooms in the Amazon, but mostly we just found bio-luminescent mycelia and once we found a bunch of little Mycena on a log, but the insects had already munched most of the caps and it was a rather sad scene. Anyway, in early August I stopped by in Japan to hunt for bio-luminescent fungi. Although June, I found out later, would have been better timing - the mushrooms react enthusiastically to the first phase of the summer monsoon rains - still I got lucky. A typhoon messed quite a bit with the logistics and the mushrooms, the intense winds dry them out, but in the end I am very happy with what I experienced and quite alright with what I managed to photograph.

In the dark of night finding these glowing jewels is an indescribable feeling!
I admire and love mushrooms, but the feeling sitting in the dark with these light-emanating mushrooms is really awe inspiring.
They quietly radiate a mysterious and impressive energy.

A group of the glowing Mycena chlorophos growing from a palm frond.
(Note the automated image sequencing by watching a couple seconds) 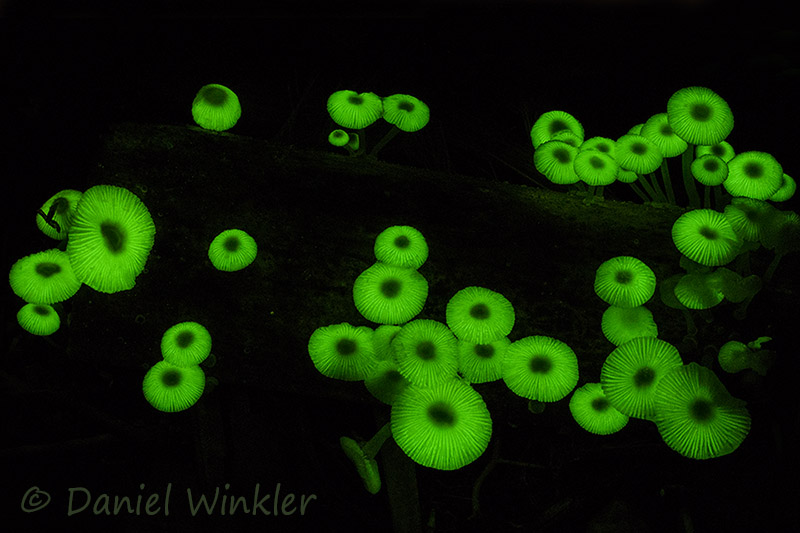 The gills emanate the most bioluminescence. Mycena chlorophos stems do not have light emanating cells and the tissue of the cap itself is so thin that the relatively thick gills are much brighter.
However, the mycelium is also bioluminescent - see below, but is too dim to compete with the bright caps, which are extremely viscid.

The darker image of the Mycena chlorophos was exposed for 15 seconds with an ISO 1000 and aperture F4. The second image is slightly lit with indirect light of a LED flash light (Note the automated image sequencing). 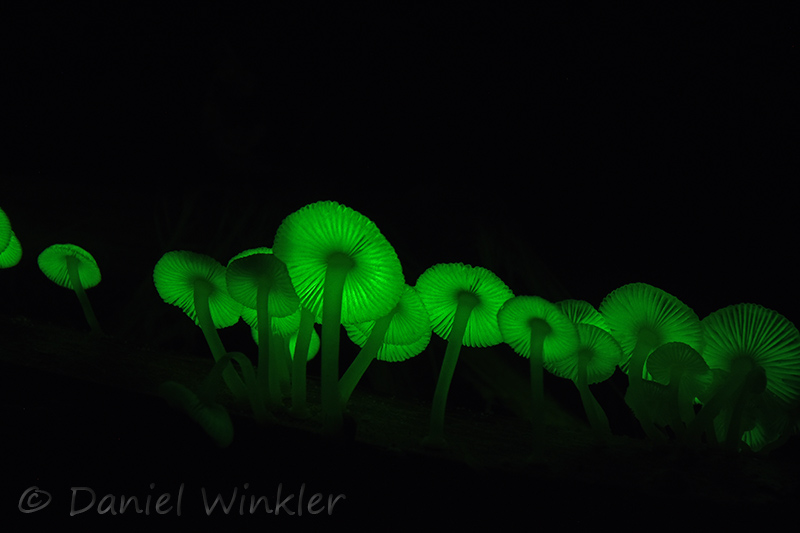 Bio-luminescent cap and gills of Mycena chlorophos. This Mycena is a saprobic mushroom, meaning it lives of digesting wood. Bio-luminescence lasts under normal conditions for about 3 days.

Favolaschia peziziformis
Favolaschias are also wood decayers. And as all bio-luminescent mushrooms they are white rot fungi, which break down the lignin in wood.
It is speculated that in the enzymatic process of breaking down lignin bioluminescence could be a by-product. 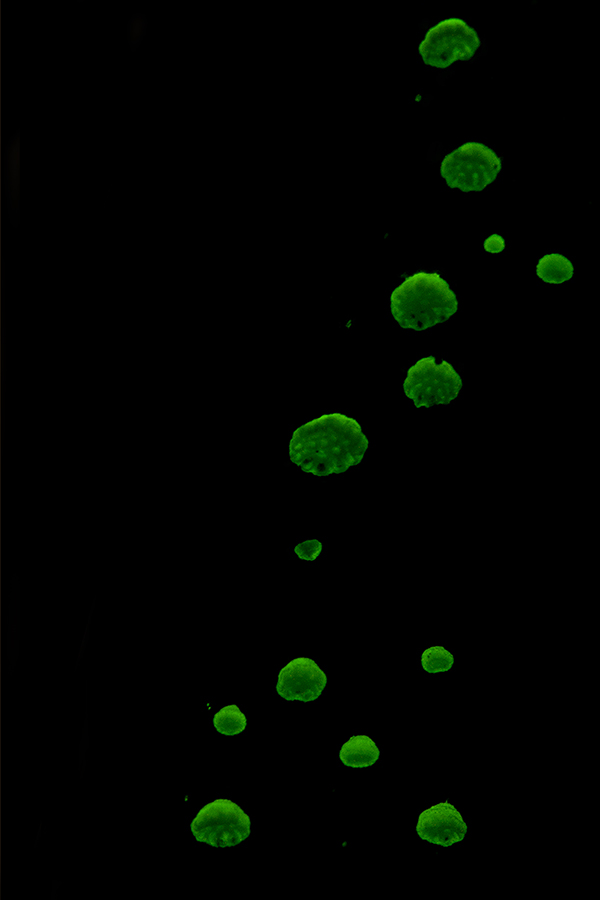 Tiny Favolaschia peziziformis growing on a palm frond. The first photo is taken with a the built-in flash, the second is a composite image of several 30 second exposures (Note the automated image sequencing by watching a couple seconds). 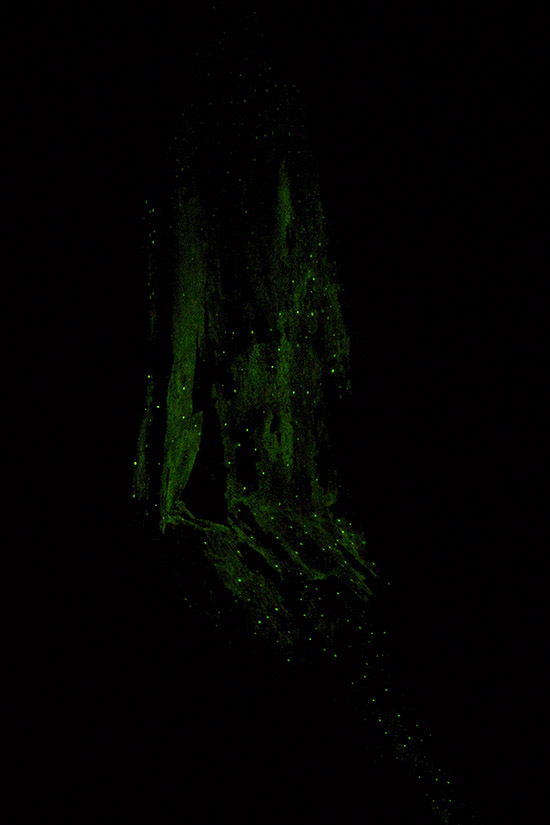 The bright spots are primordia, "fungal buds" where mushroom fruiting bodies might grow very soon when temperature and humidity are right.

Two branches with bioluminescent mycelia.
Below the two branches photographed with flash. 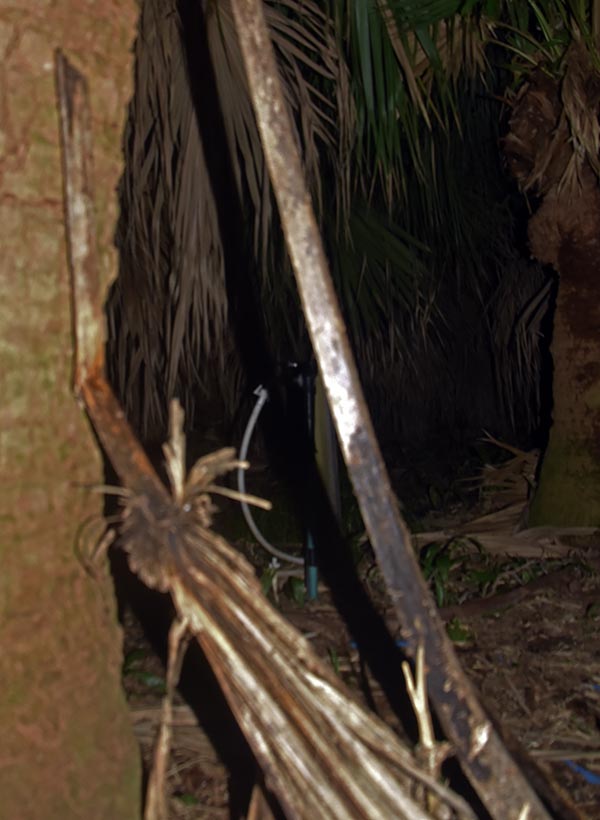 The auto-focus apparently aimed at the palm trees in the back, but the two branches leaning against the trunk of a palm are clearly visible.
However, the photo also shows that mycelia are active in a dead palm fonds in the back top right corner. 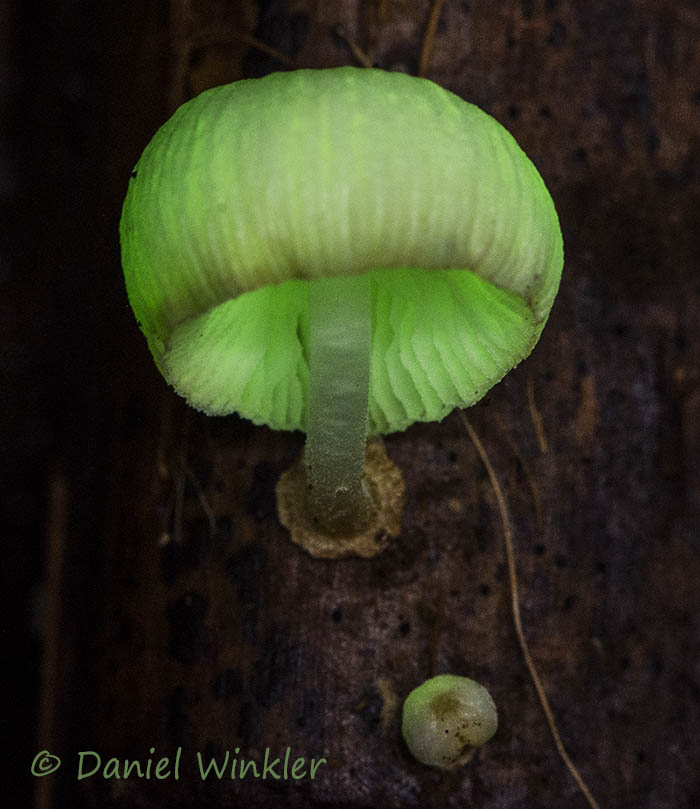