In early August 2016 I went to Hachijo Jima, an island about 300 km South of Tokyo to look for bio-luminescent fungi. During the day I was hoping to find some Cordyceps. There were not too many fungi fruiting any more. We were told mushrooms are more abundant in June and early July, in the early phase of the summer monsoon. Every time we went looking for mushrooms I found one or two specimens of Ophiocordyceps yakushimensis right in the beginning and then no more Cordyceps for the rest of the day. However, the specimens we found were very interesting for several reasons I'll show below. Ophiocordyceps yakushimensis is a cicadae parasitizing cordyceps. Note both specimens have secondary white fruitings.
While the fresher specimen on the left has initial growth of an anamorph out of the head of the cicada nymph,
the older specimen on the right has some other kind of white fruiting fungus on the broken off, decaying stroma (more details on the enlargements below). Out of the top of the head of the cicada nymph grows the teleomorph, the white anamorph structures seem to grow out of several places around the head and thorax.
Note the cavity, in which I found the parasitized nymph.

Mature fruiting bodies of Ophiocordyceps yakushimensis with an anamorph on the base. The cicada nymph host and the parasitizing Ophiocordyceps yakushimensis-teleomorph/anamorph fungus complex presented on a leaf. An over-mature stroma of Ophiocordyceps yakushimensis with a white fruiting that looks like a secondary parasite to me. Close up of the rotting and heavily parasitized stroma (If you should have an idea what I found, please let me know). This is how I found the two cordyceps. On the left clearly a mature stroma, but I was not clear what this growth represented on the right. However, once dug out it was clear it was the broken-off stroma of another Cordyceps (see 1st image). The white tissue looks like the parasitic structures shown above, but the yellow cap like structure is confusing, the more when taking into account there is also yellow tissue on the broken off stroma.  (As stated above, if you should have an idea what is going on, please let me know) Probably an Isaria tenuipes (= I. japonica), which would be the anamorph of Cordyceps takaomontana. Interestingly, it was suspended in the air. Another awesome find in Japan, I love it!: 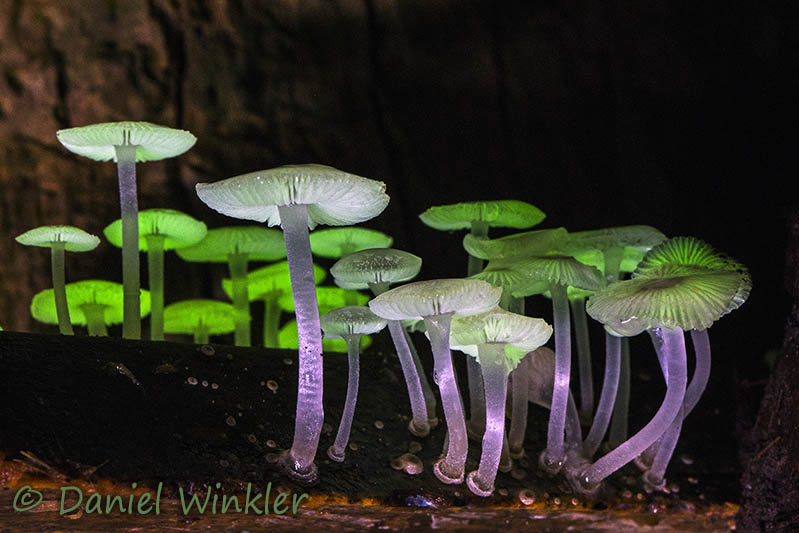 Mycena chlorophos, a bioluminescent mushroom. I went to the island to find these gorgeous mushrooms.
The photo is taken in the dark with a tiny bit of light from a flash light, which produced the purplish hue. The bio-luminescent light emitted is greenish.
Sorry there are no bio-luminescent Cordyceps fungi!
Much more on the subject and many more images can be seen on my Mushroaming blog.

Acknowledgements: Special thanks to my friend Ikuko Okuyama who helped me make my dream come true.