Here a selection of Cordyceps & allies we have encountered in early February during the Mushroaming Bolivia Tour 2015.
All the specimen were located in Madidi National Park in around 250 to 300m altitude. An immature Cordyceps growing out of a male Scarabaeid Dung beetle (Oxysternon conspicillatum) . Kobayashi described a Cordyceps scarabaeicola from East Asia, but I have no idea if this specimen is closely related. This one was found by Don Moore, Larry Evans found a more mature specimen in Madidi in 2007, whose stroma seemed close to Metacordyceps martialis. BBC has a great video on dung beetle in action in the rain forest A perfect specimen of Cordyceps locustiphila. A giant 12 cm locust taken out by this parasite. Stromata growing out of the head and thorax are more mature than the ones  out of the abdomen. It just laid like this on its back in the dry leaves when Pam Buesing spotted it at Wizard Mountain near Rurrenabaque.
What a find!!!
Actually this Cordyceps is now known as Beauveria locustiphila (Henn.) B. Shrestha, Kepler & Spatafora, IMA Fungus 8 (2): 345 (2017) Do you spot the Cordyceps? Unfortunately this Cordyceps I found on my computer screen when looking at the weird structure of this Xylaria in the X. polymorpha group. I found a second stroma further in the back.  Interestingly it also shows how long lasting these old Xylaria fruiting bodies are that they are used by Cordyceps. Missing aCordyceps in the field happens probably all the time, but taking a picture of one and discovering it in photo also happened to me before. Both times my attention was focused on a much bigger mushroom. Below a serious enlargement of the Xylaria: Cordyceps growing from an ant attached below the old fruiting body of a big Xylaria polymorpha group. It might be the immature stroma of Ophiocordyceps australis.

Ophiocordyceps australis growing from a contorted ant. The branching stroma is mostly immature besides one mature head. 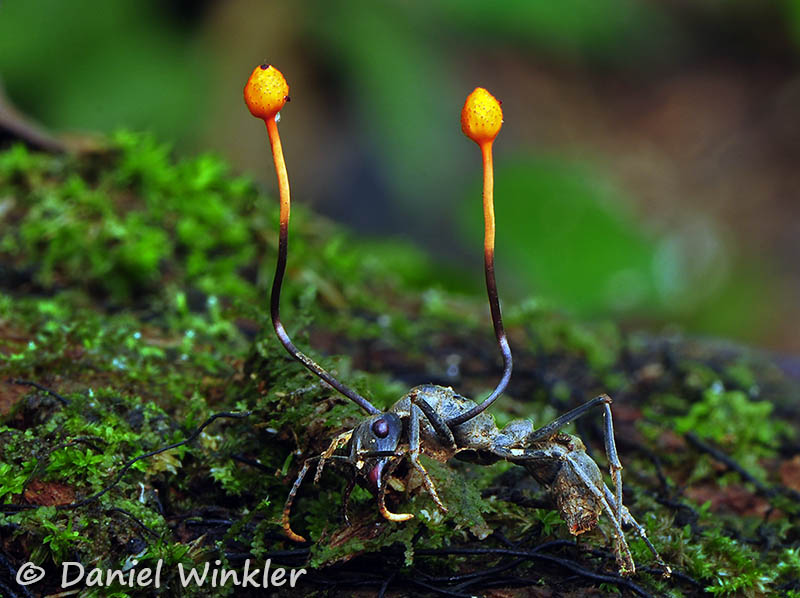 Two stromata of Ophiocordyceps australis growing out of an ant. The fruiting body reminds me of Ophiocordyceps kniphofioides, but the host of O. kniphofioides is usually an ant and not a beetle. This is the same specimen seen from both sides. An old Akanthomyces sp. that digested a moth. Face of the moth infested by an Akanthomyces sp. Torrubiella sp. growing on a moth attached to a leaf. On the abdomen of the moth one can see the roundish perithecia, the structure in which the ascospores are produced. Around the head the synnemata that are typical for the anamorph. Some Gibellula species are the anamorph of Torrubiella species The stroma of an Ophiocordyceps close to O. sobolifera growing out of the loamy mineral soil near Macaw Rock. The site is in the flood plain of the Rio Tuichi. Immature  stroma that is just branching. It looks like the main axis dried out and a second growth spurt initiated growth out below the dry-out point. A mature and immature fruiting body of an Ophiocordyceps sobolifera group. Both are growing out of Cicadas in larval state.

Close up of the fertile tissue of Ophiocordyceps sobolifera Cordyceps growing out of an old decomposing branch. Close up of the stromata of a Cordyceps on coleopteran larva 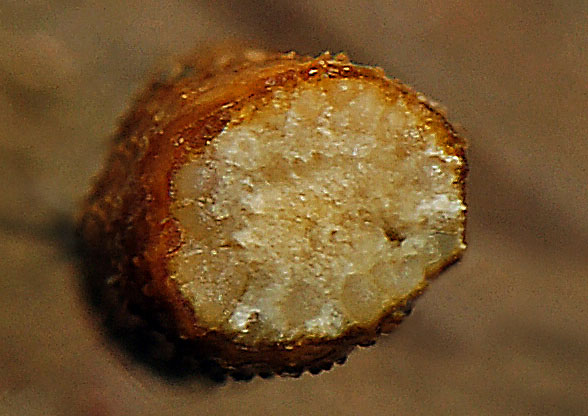 Close up of the dissected stroma. As good as it got with macro and photoshop. It looks better under a microscope. Metacordyceps martialis fruiting body growing out of a dead trunk Dug out Metacordyceps martialis growing on a larva, probably of a coleopteran beetle found on Wichi Trail, Chalalan. A dried in specimen of Ophiocordyceps dipterigena, the fly parasitizing Cordyceps.
O. dipterigena and O.australis, the ant parasite are the Cordyceps we find most frequently.

A Cordyceps growing from a shield bug, but I have not figured out its identity yet. A strange Cordyceps that might be growing on a stick bug. Unfortunately I lost this sample before i could clean it and take another picture.