Below the 2020 tour outline to give you an idea how we organize our adventures. We will publish the 2021 itinerary once we know it can be done!

The tour will start Sunday afternoon March 8 in the buzzing Andes metropolis of Bogotá, where we will sample the rich culture and learn about its political history. Monday afternoon we will fly south to Pitalito, gateway to the famous archaeological site of San Augustin in the Upper Rio Magdalena region. The area is rich in extremely biodiverse Andean oak forests, the southern most Quercus forest on the globe. We will enjoy locally grown fresh coffee while visiting a traditional coffee farm.  Furthermore in Mocoa we will hike to the "Waterfall at the end of the world" and visit a botanical garden with focus on medicinal plants. Then we will be traveling down to the Putumayo area and into the foothills of the Western Amazon. Sunday Mar. 15, we will hike from Orito to our jungle lodge located in the Isla Escondido Reserve, which is only reachable by a 3 hour hike through the beautiful and highly bio-diverse tropical lowland rain forest, where we will be staying for three nights. We will fly on Mar. 18 from Puerto Azis to Cali, where we have 2 days 3 nights to explore Cali, the capital of salsa. We celebrate our adventure in the evening of March 19 with a farewell dinner and the fungal fellowship will disperse on March 20. We will be accompanied by Colombia native Dr. Tatiana Sanjuan, who received her PhD for her neotropical Cordyceps studies. She was instrumental in designing our itinerary in cooperation with Mushroaming.

For preregistration do send us an email, the 2019 tour sold out!

Below our tour outline 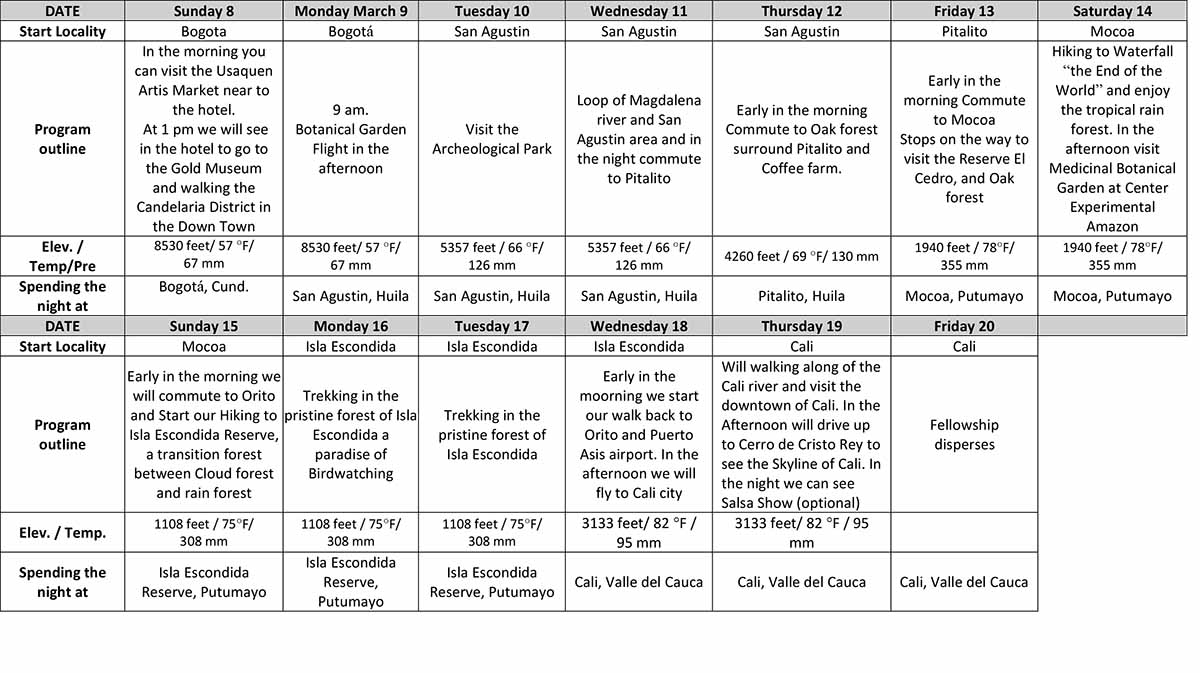 Please note that sometimes the itinerary might have to be changed due to circumstances.

Colombia is a very diverse, listed as one of the world's 17 megadiverse countries, actually the most biodiverse per square kilometer. Colombia is a truly fascinating country. Traveling in Colombia is such a joy. Colombians seem so happy and proud to share their country with foreigners again.  It is emerging as one of the most enticing destinations in South America since civil unrest has ceased and normality has returned. Colombia is located at the nexus of South and Central America.

Price includes all expenses on the ground for accommodations in double room where available, meals & ground transportation. Not included are alcoholic drinks, coffee breaks, snacks, laundry, tips, souvenirs, etc. Also not included are the 2 flights within Colombia (together below$200) and airport shuttles at the beginning and end of the tour.

Participants will need to organize their own flights to Bogota and back from Cali. It is recommended to arrive a day early, we will help booking a room, so you are fresh to participate in the first days activities.
Pre-registration & Registration

Note: For years Colombia's tourism has suffered from lack of security in the country. However, the security for foreigners has substantially improved in recent years. In late 2016 the government has signed a peace accord with the biggest rebel fraction and Colombia is moving beyond the painful decades of internal violent clashes and tourism is picking up again. Still providing safe travels is most important to us and we need to state that there is a slight chance that we would need to adjust the itinerary in case of unforeseen changes in public safety.

Some photos from our previous Mushroaming Colombia journeys: 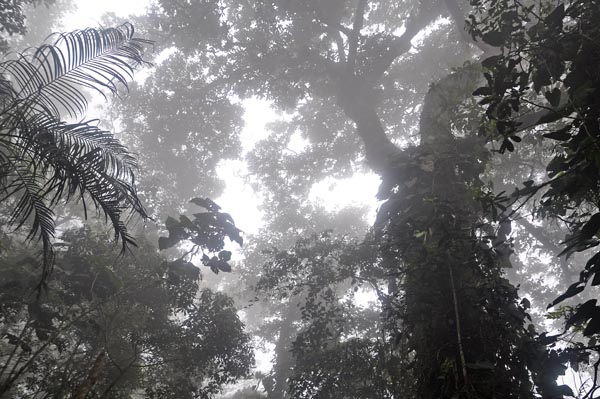 A scarlet Favolaschia, which is a gorgeous wood decaying member of the Mycenaceae family. Most Mycenaceaea members are regular gilled mushrooms.

A Guzmania, a member of the Bromeliaceae family, which also includes pineapples and Tillandsia. 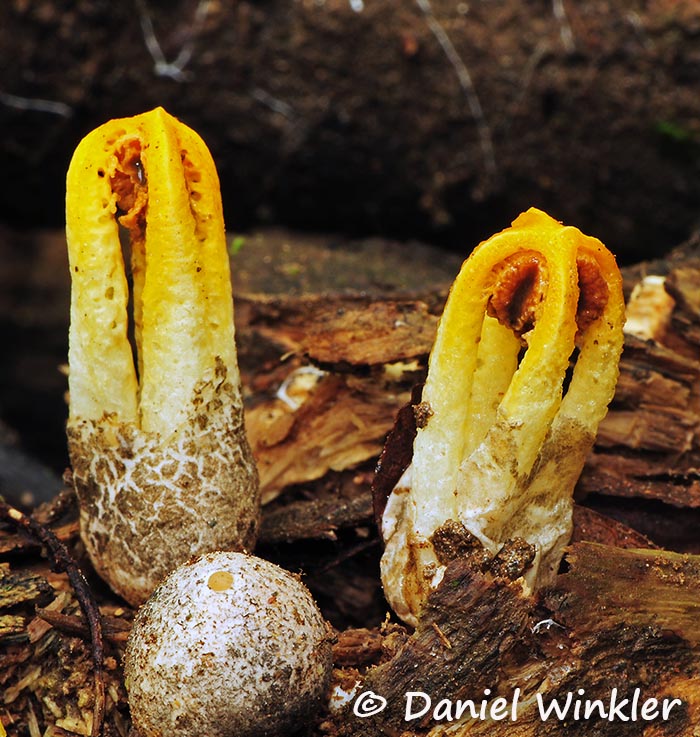 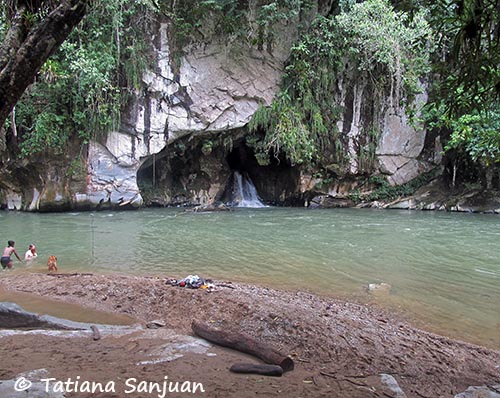 Río Claro - note the waterfall coming out of a karst cave. 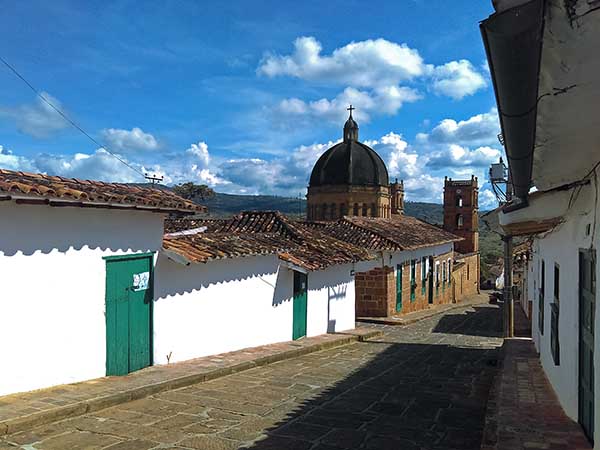 Looking down a street to the cathedral  in Barichara. Photo: Tatiana Sanjuan

Nice juicy, big chanterelles. Hardly any Chanterelles or for that matter any other edible mushrooms are collected in Colombia due to lack of knowledge. The exception is in the Villa de Leyva area, where people collect corals, chanterelles and a neotropical Shiitake relative. 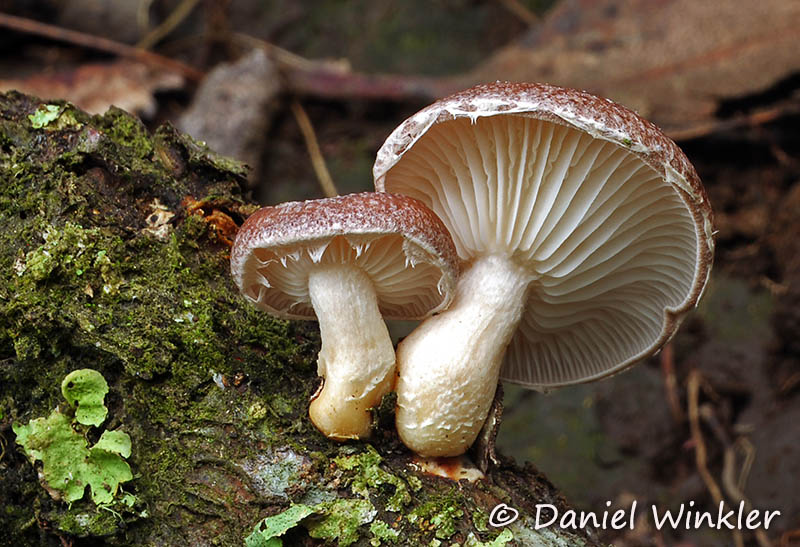 Lentinula aciculospora is a close cousin of Shiitake (Lentinula edodes) and also a good edible and known as such in the Villa de Leyva area. 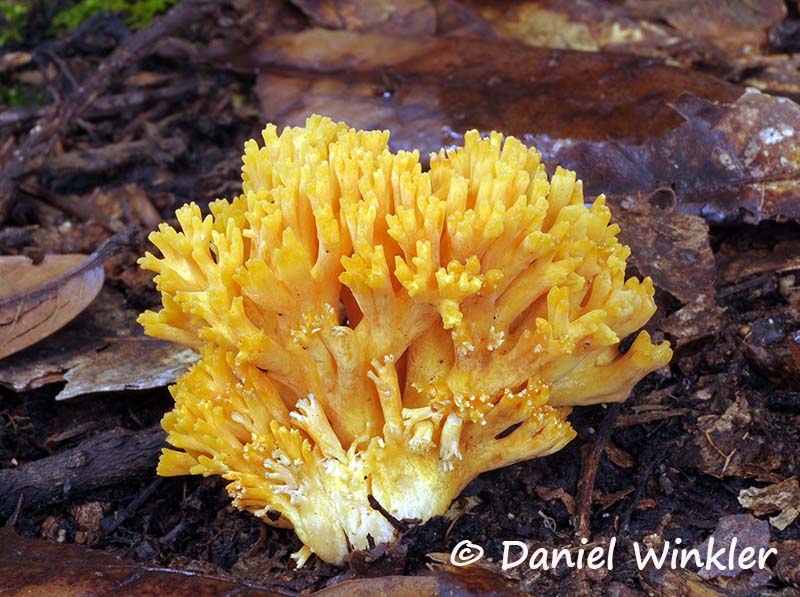 A Ramaria sp. coral known locally as "Manita" and appreciated as an edible mushroom. Seen near Iguaque Parque Nacional.

A "Zombie ant" with the parasitic fungus Ophiocordyceps unilateralis growing out of its neck. This ant was direct by the fungus in this location. At this point the fungal fruiting body is not developed yet beyond a little "horn-like" structure. Once the fungus has moved the ant in its final location for optimal spore dispersion, it makes the any bite into a leaf or twig and/or clasp a twig. Then the ant will be killed off by the fungus and the fungal mycelium will anchor the insect to the site. At this point the fruiting body will grow and mature.

A Cordyceps stroma growing out of a steep slope. Digging out will reveal its identity, see below...

Ophiocordyceps caloceroides group growing on a trap-door idiopidae spider. See below for a close up (the tip had been sniped of for analysis.

Link to my Cordyceps of Colombia blog page 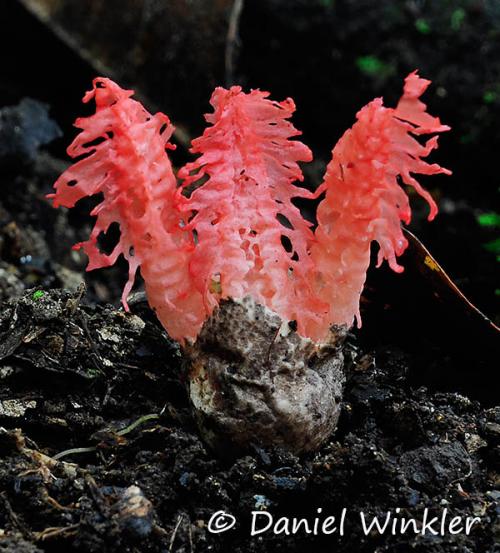 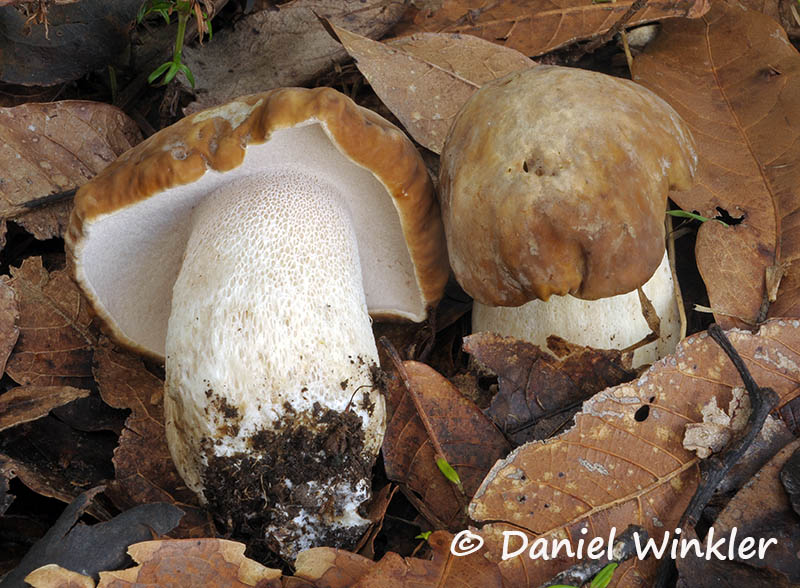 A porcini-like Bolete we found near Villa de Leyva. It could be Boletus variipes. It had the nutty mild taste, people love in porcini. 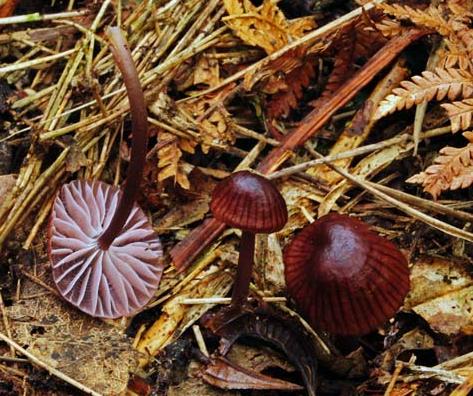 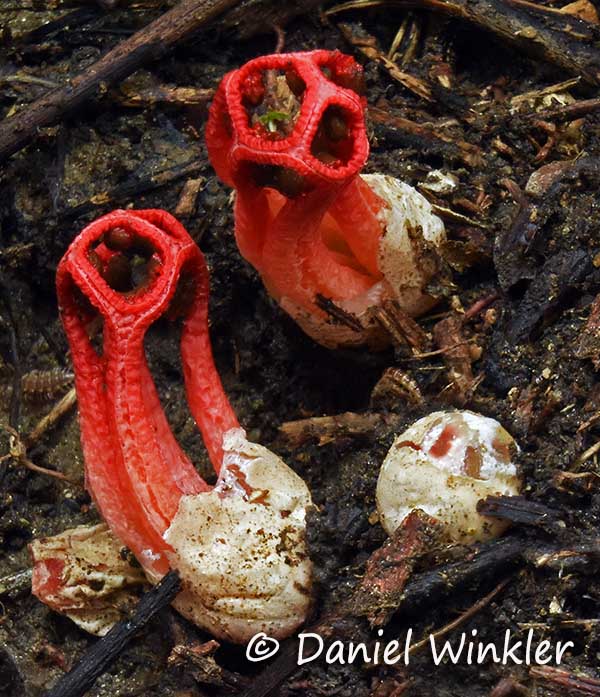 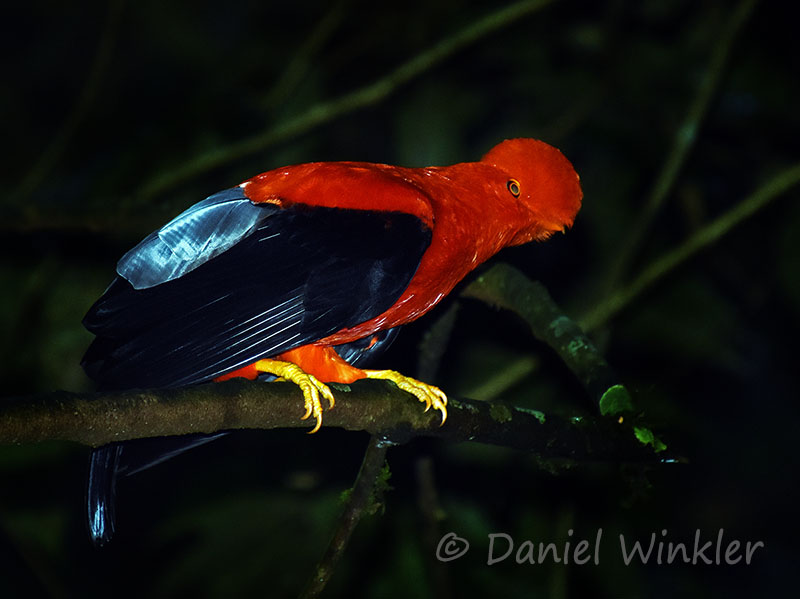 A Cock of the Rock (Rupicola peruviana) seen in Jardin.

Boletellus ananas growing with Humboldt's oak in the Colombian Andes. What a beautiful and strange partial veil from the extended skin of the cap (pileipellis) this bolete has! In the USA it is reported from Florida. Furthermore, in Southwest China and Tibet grows a very similar mushroom, so far listed under this name.

The tiny Marasmius sprucei growing out of twigs.

As many other members of the Balaonphoraceae family this Heliosis sp. looks quite fungal. Actually some of its cousins were first erroneously described as fungi! Balaonphoraceae are direct root parasites and do not produce any photosynthetic sugars themselves, but feed of others plants. 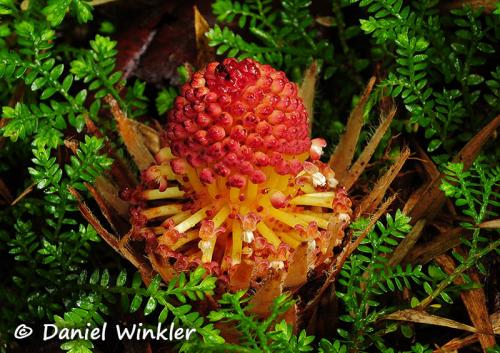 Once in flower Balaonphoraceae do not look very fungal anymore, but are still a very strange plants. This should be a male Langsdorffia hypogaea. Seen in Chicaque, April 2015 in 2400m. 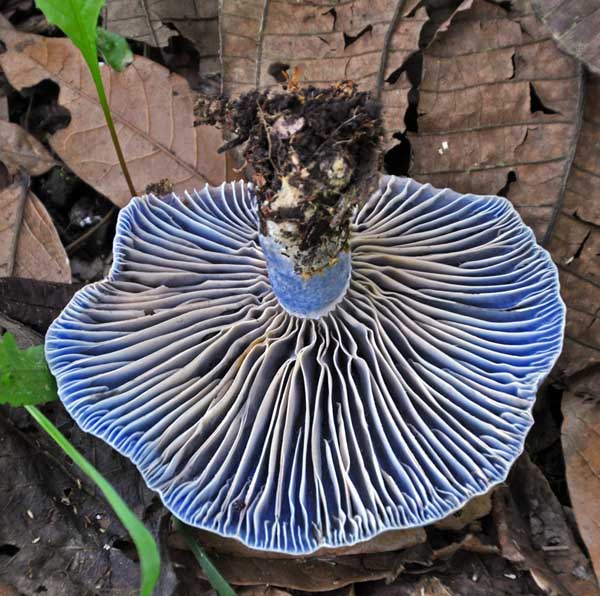 Lactarius indigo, a spectacular milk-cap that is oak associated from the US East Coast down to Colombia. It is also edible. 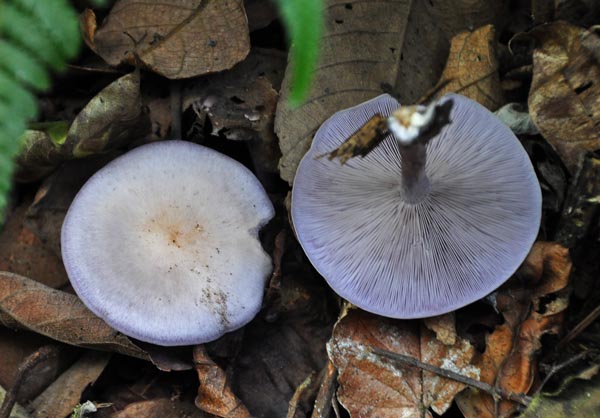 The ubiquitous Blewit, Lepista or Clitocybe nuda. A good edible! 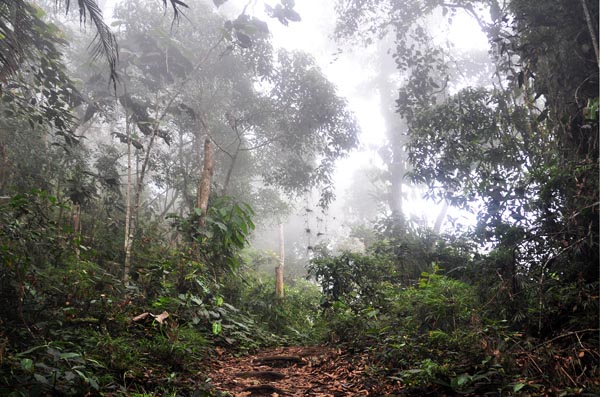 A hiking path passing through the cloud mountain oak forest. The temperature is perfect for hiking under such conditions! 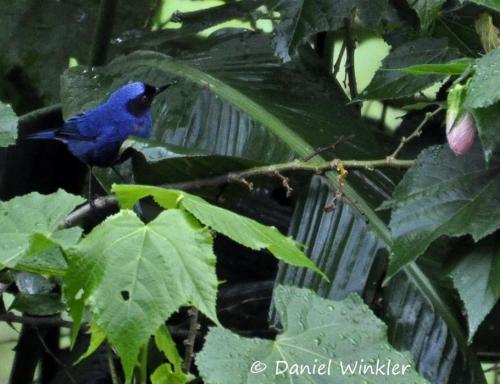 Diglossa cyanea, the Masked Flower-Piercer is easy to observe in Chicaque. 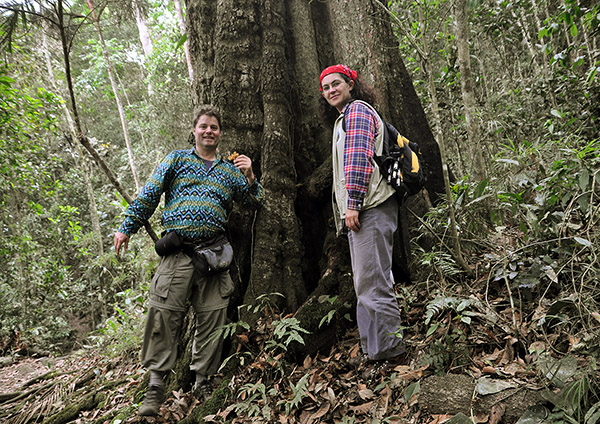 Tatiana Sanjuan, our Colombian guide and PhD mycologist. She is good with mushrooms and people! and loves to share her fascination for her home country. Daniel Winkler on her side in the cloud forest in front of a big Andean oak (Quercus humboldtii).

A Cordyceps close to C. militaris growing on a giant larva in Rio Claro 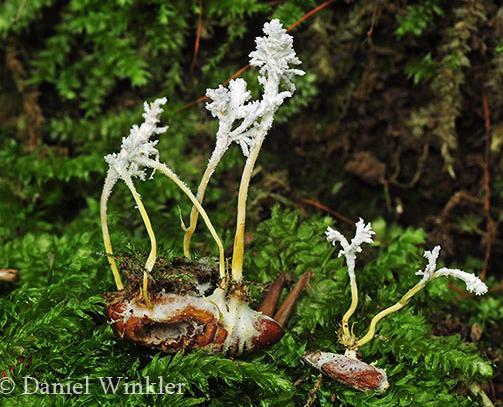 Isaria tenuipes, a Cordyceps anamorph so abundant, we stopped  photographing it. 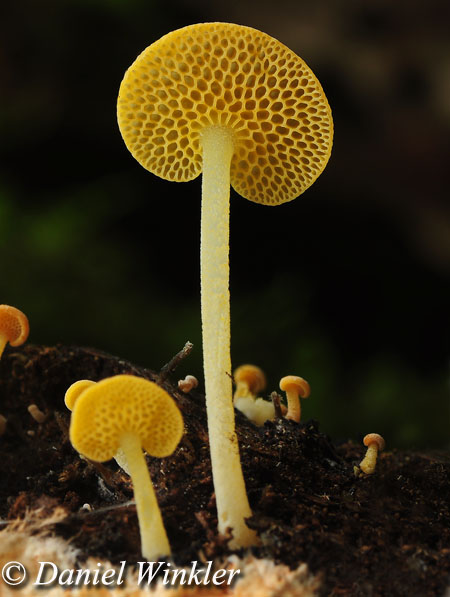 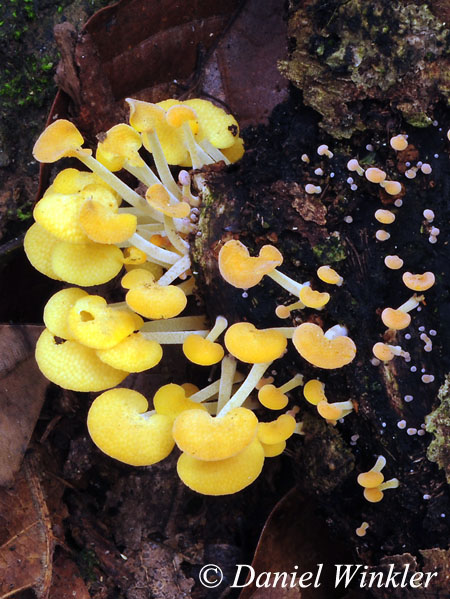 The cluster of the above depicted individual Favolaschia growing from a big fallen branch. 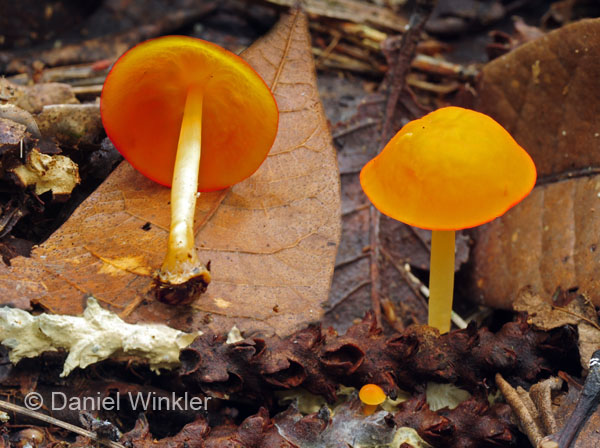 Hymenogloea papyracea, a gilled mushroom from the Marasmiaceae family without gills. 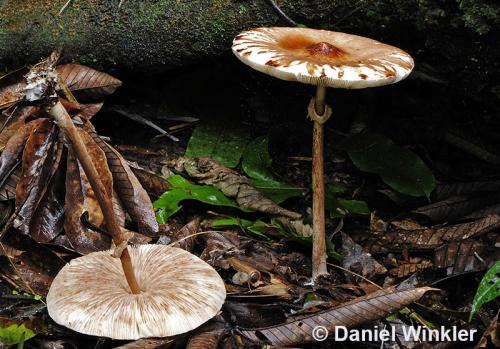 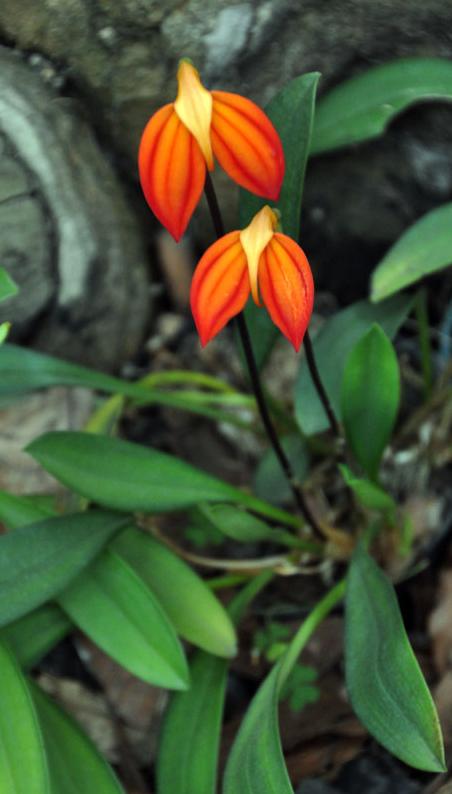 A Masdevallia ignea orchid encountered in Bogota's beautiful Botanical Garden. Masdevallias are endemic from Mexico to south Brazil. They mostly grow in the higher regions from 2500 to 4000 m, especially in the Andes.

A giant Gunnera hiding Heidi in the highlands.

A tiny Gunnera flower branching off a ground covering vine growing in the Paramo. Most people know Gunnera as giant perennials.

Dictyonema sp., a lichenized basidiomycete from the Hygrophoraceae. In the past there was only a few species recognized, but new DNA research shows an incredible diversity of maybe 100 or even more species. In Ecuador grows Dictyonema huaorani, which is reported to be psychedelic.

A very striking and widely distributed forest lichen in tropical and subtropical areas of the Americas: Cryptothecia rubrocincta, known in North America as the Christmas wreath lichen.

My Cordyceps in Colombia page