Cordyceps in the Bolivian Yungas 2015

On a short hike along a shady creek not far from Senda Verde Animal Rescue Center we ran into a treasure trove of Cordyceps fungi.
Within a few hours we found 15 Cordyceps specimens belonging to 12 different species in 8 genera. After we had found the first Cordyceps, I remembered we should check under leaves for Cordyceps. So I told the Mushroaming group, "turn over leaves and check for Cordyceps down below". And the first leaf I turned over after having said that actually had an Akanthomyces growing below, what a coincident!
The site was located in about 1350m. Yungas refers to the warm, humid forests sandwiched between the lowland Amazon rain forest and the Andean Altiplano.

An Akanthomyces, possibly A. pistillariiformis growing on a moth that was attached to the underside of a fern (The dark brown spots on the leave are sori). 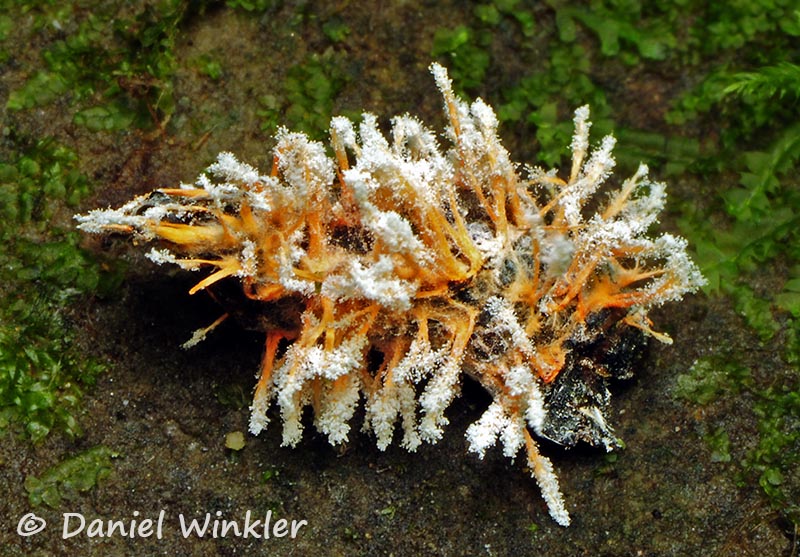 An Isaria sp. in the Isaria amoenorosea group parasitizing a Lepidoptera host. Isaria is an anamorph. Anamorphs reproduce non-sexually by growing conidiospores that clone the DNA of the parental organism.

Mature stromata of Ophiocordyceps dipterigena grown from the mummified host a fly.
On the stroma in front one can recognize the perithecia, the roundish structure with a ostiole in the center, the opening out of which mature ascospores are ejected.. 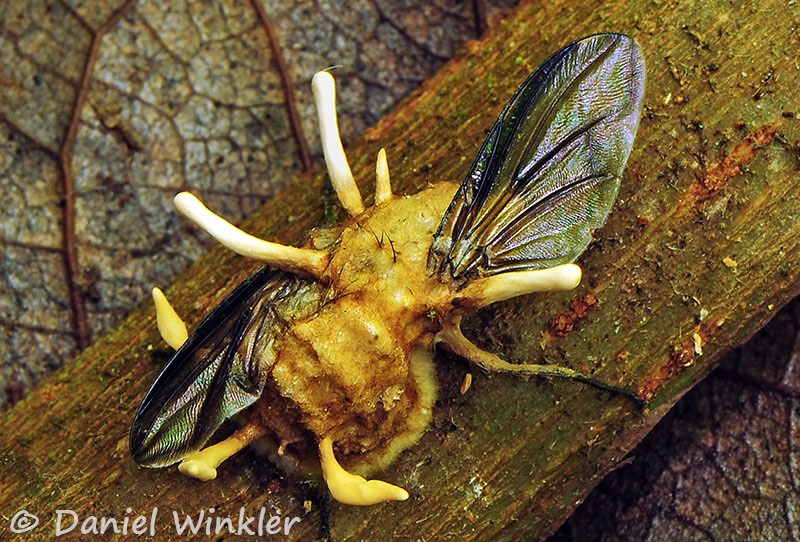 A young specimen of what looks like to Ophiocordyceps dipterigena. The fungal fruiting bodies are still growing from the parasitized fly. While I assume the tall whitish stromata will develop the typical "hammerhead" of O. dipterigena stromata, they also could turn out be Hymenostilbe fruiting bodies or to stay with the new terminology, just O. dipterigena anamorphs producing asexual conidiospores. Even more perplexing is the shape of the three yellow fruiting bodies at the lower end. There shape does not look very much like O. dipterigena, but they are still developing and they might "shape up".

This seems to be Sporothrix isarioides, a hyperparasite growing on the parasitic Ophiocordyceps dipterigena that parasitized a fly in the first place. (Unfortunately the photo is not completely in focus since the fly was attached to a small tree that apparently moved a tiny bit in the wind.) 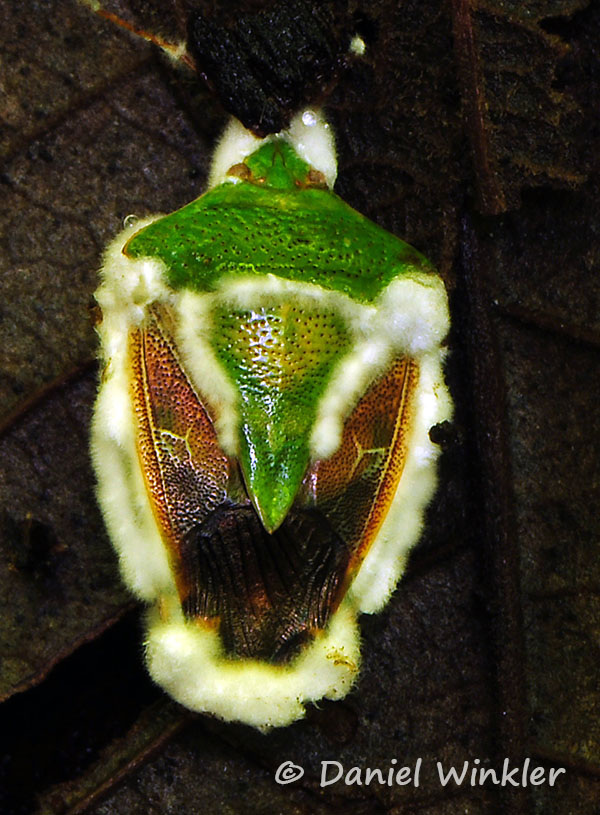 Some entomophagous fungus, could be anything from a Beauveria to a Paecilomyces. 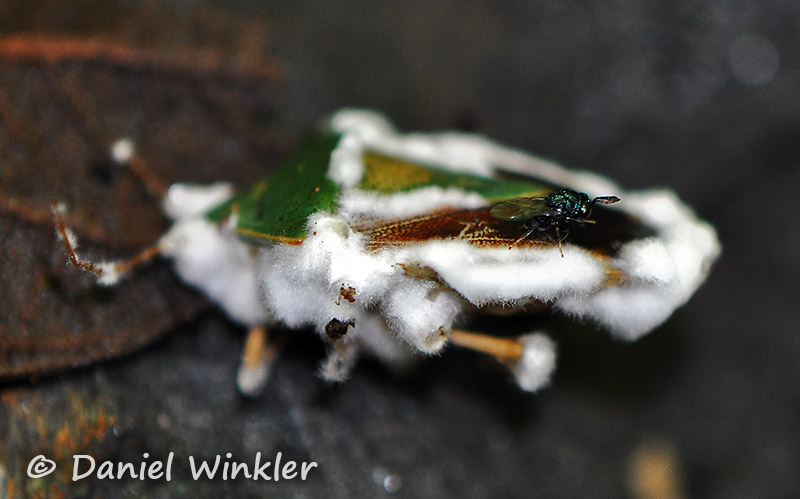 A fly seems to be attracted to this entomophagous fungus. 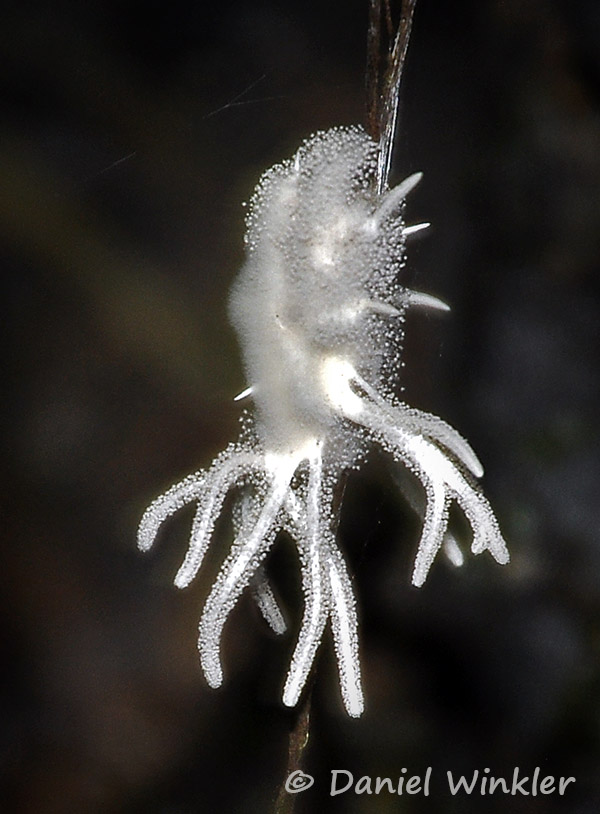 Gibellula, maybe G. pulchra, has completely enmeshed a spider that was attached to an air root and is producing millions of conidiospores on the fungal synnemata. 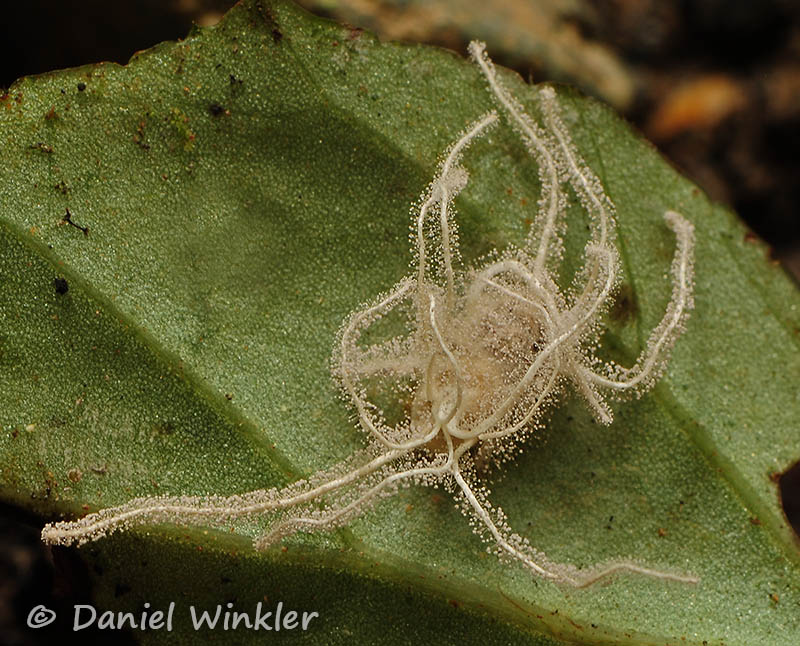 Gibellula pulchra? growing on a spider that was attached to below a leaf. 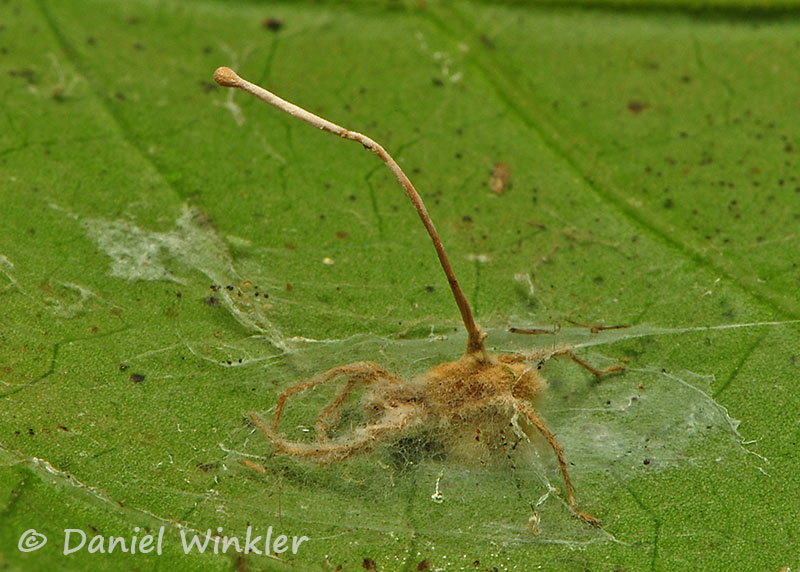 A spider victimized by some type of Cordyceps, maybe a Polycephalomyces species . 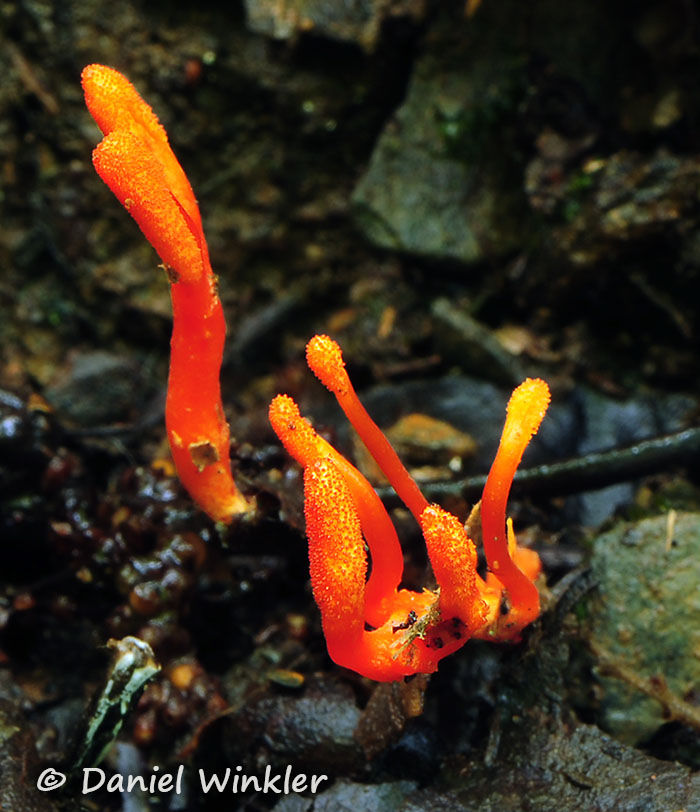 Probably the fruiting bodies of a Ophiocordyceps caloceroides group. Cordyceps of this group are specialized in attacking spiders and spider eggs. 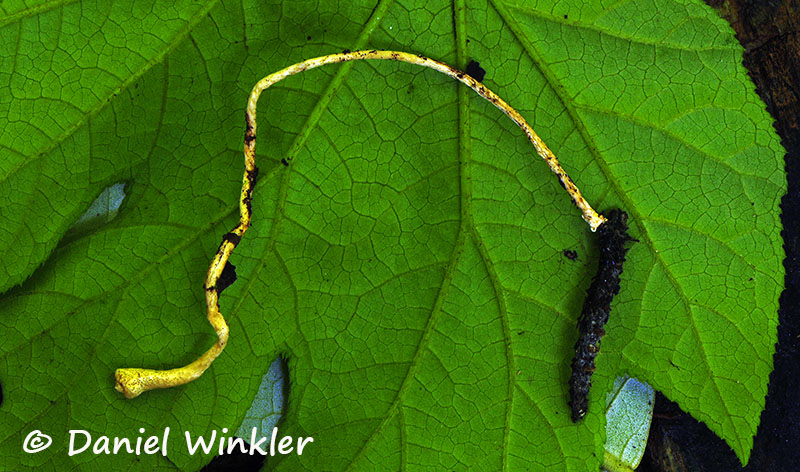 A Metacordyceps growing from a larva. 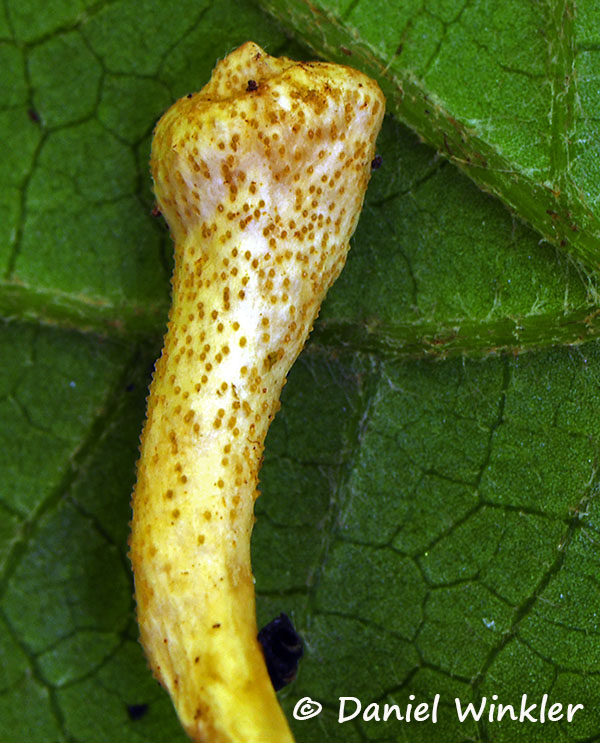 The fertile tissue of the stroma of the Metacordyceps.

Close-up of the fertile tissue of the stroma of the Ophiocordyceps nutans. 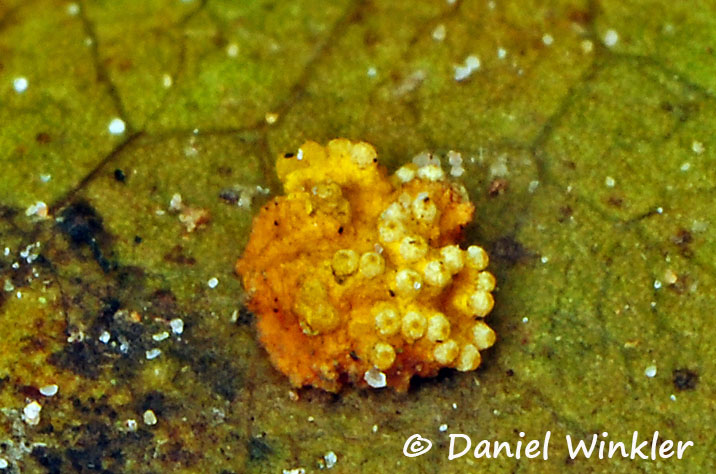 An Aschersonia sp. with mature perithecia. These tiny yellow spots were all over. This was the first time I checked for these fungi and there hundreds of them in the rain forest. 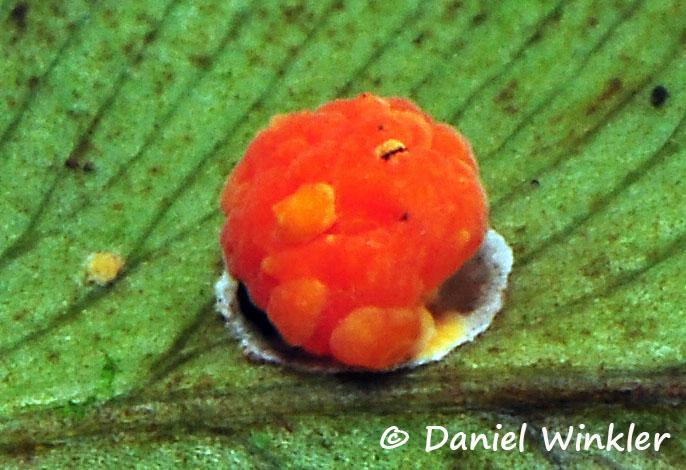 An Aschersonia feeding on a tiny insect like a aphid or are these insect eggs?

We were puzzled for awhile what we were seeing here. At first we were hoping we had found a very strange Cordyceps, but proper magnification popped that dream quickly.  Still there is some entomophagous fungus action going on, maybe a Beauveria or some other "fungus imperfectus".