[Photos can be found in the photo section under Jiuzhaigou & mountain forests as well as a list of the Flora of Jiuzhaigou]
Plant Research and Development (1998), Focus: Forest Management and Sustainability Vol. 47/48, Tübingen, FRG, 184-210.
THE FORESTS OF THE EASTERN PART OF THE TIBETAN PLATEAU
A Case Study from Jiuzhaigou (Zitsa Degu; NNW Sichuan)

This paper illustrates the forest vegetation of Eastern Tibet presenting a case study from Jiuzhaigou (Tibetan: Zitsa Degu). Furthermore deforestation caused by traditional land use practices and by modern timber extraction is analyzed. Jiuzhaigou Nature Reserve (103°46'-104°05'E / 32°55'-33°20'N) is located in NNW-Sichuan's Min Shan. The high mountain climate (744mm/a, annual mean temperature 7.3°C at 2400m) is subtropically influenced and typical for the moister fringe of the eastern slope of the Plateau.

The absence of forests on the south-facing slopes was previously attributed primarily to climatic conditions. However, new research has shown that, in Jiuzhaigou, human impact is the primary cause for the absence of forests on the south slopes. Extending over a period of millennia man and his grazing animals caused substantial forest reduction. Thus, one of the main causes of Eastern Tibet's widespread phenomenon of forest-free south-facing slopes is pastoralism.

Although commercial timber extraction in Jiuzhaigou was stopped in 1978, the vast forests of the eastern slope of the Tibetan Plateau are being reduced at an alarming rate. Chinese figures point to 50% forest reduction in W-Sichuan in the last 40 years, caused mainly by a state-controlled forest industry. Massive extraction of timber is taking place, neglecting ecological and economical principles. Reforestation and sustainable forest management are still widely absent. 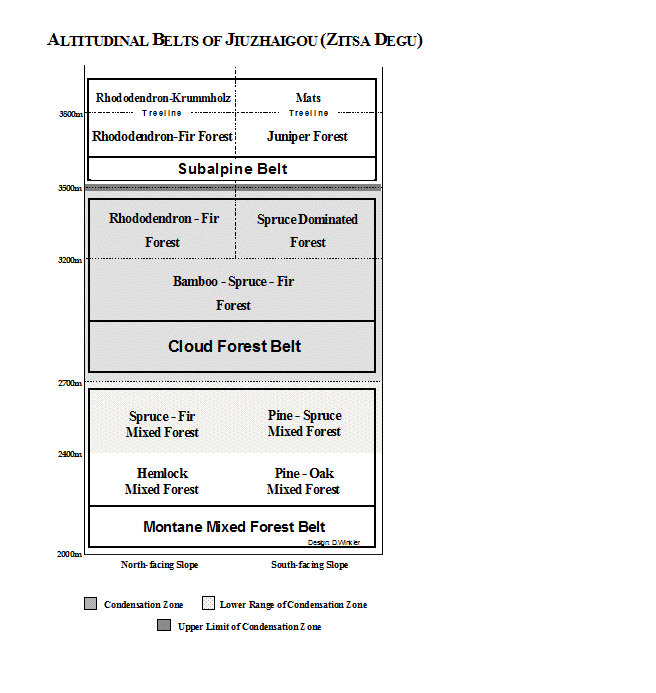 The following presentation gives a description of the vegetation of every altitudinal belt from the valley bottom up to tree line (Fig.3). Each is preceded by an account of the typical form of land use, climatic conditions and the prevailing soil types. The forest vegetation is described in its present condition, with particular consideration to tree species. Fig. 4 provides a graphic on the three-dimensional zonation of the forest vegetation. The outline of the herbaceous, shrub and moss layer includes vines and epiphytes. Fig.5 lists the dominating plant species for the vegetation layers in the altitudinal belts. Ecograms on the various forest types (Fig. 6) give an impression of their competing power as a function of water availability (x-axis) and thermal conditions (y-axis). Water availability allows conclusions as to the dominating type of undergrowth. Shady, moist sites are usually poor in shrubs and rich in mosses, while sites with good water availability are rich in shrubs. At exposed sites, grasses and sedges dominate the undergrowth. In CHEN's original ecogram (1987) the lower half of the thermal range is occupied by Sinarundinaria (meaning Fargesia/Sinarundinaria), while the upper half indicates Rhododendron as the predominant species. However, this characterisation is misleading in Jiuzhaigou. The dry-valley character of the study area manifests itself especially in the montane belt by markedly reduced moisture input. Here there is almost no bamboo. Bamboo is replaced by Rhododendron, which is predominant on the shady slopes of the lower montane belt. It is only in the condensation zone that the undergrowth comes to be dominated by bamboo, which requires a minimum mean annual precipitation of 900mm/a in Sichuan (CAMPBELL and QIN, 1983). The altitudinal belts of Jiuzhaigou (Fig. 3) were defined in accordance with MIEHE's (1991) altitudinal zonation of the Central Himalaya. Had it been defined according to the English-language Chinese literature (e.g., YANG, 1992; LI, 1993), the whole altomontane cloud forest belt including the subalpine belt would have had to be classified as "subalpine forest belt". A more detailed description of the forest vegetation and soils of Jiuzhaigou are to be found in WINKLER (1994). 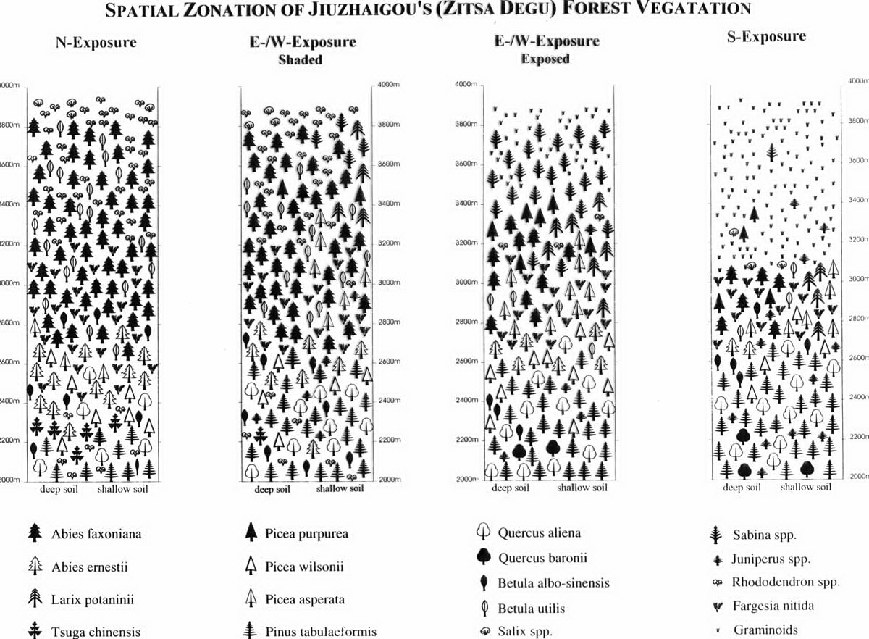 The all-pervasive presence of dead bamboo lends the forest had an overall gloomy appearance. The naked brown culms remain standing for years as relics of a past bamboo flowering. Flowering of Fargesia nitida is induced synchronously in all conspecifics every 70 to 80 years (SCHALLER, 1985). In the Jiuzhai valley Fargesia nitida last flowered in several stages during the 1970s and 1980s. SCHALLER (1985) and LIU et al. (1991) list Fargesia nitida [(Mitford) Keng] = Sinarundinaria nitida (Mitford) [Nakai] as the only bamboo species of Jiuzhaigou. After flowering, the old stand dies completely. Seeds take several years to germinate and seedlings grow very slowly. (This evidently contributed to decimation of the Panda population in the Min Shan, where 138 Pandas were found perished from hunger. However, the situation was aggravated greatly by habitat destruction and fragmentation, the main challenge to Panda protection). Fargesia fangiana, for example, begins to germinate after three years at the earliest, and the seedlings need another four years to reach a height of 10 - 15 cm (REID et al., 1991). It takes altogether 15 to 20 years for a bamboo stand to reach the height of its parent stand (TAYLOR and QIN, 1992). Seeds only germinate in humid, sufficiently shaded locations. After forest destruction through cutting or burning established bamboo stands are initially favored. Increased light supply and reduced competitive pressure permit the root system to re-sprout immediately and propagate vegetatively. Unless sufficiently shaded, however, Fargesia is unable to regenerate after flowering. Birch is able to regenerate within bamboo stands if sufficiently supplied with light, as after windthrow or selective cutting. Conifers depend on bamboo flowering, or rather die-back for their natural regeneration, because dense bamboo stands greatly inhibit their growth (TAYLOR and QIN, 1989).
Figure: Ecograms of the main forest types of Jiuzhaigou

Rhododendron cloud forest belt (3200 - 3500m)
Around 3200m, many subtropical species reach their maximum altitude and are replaced by temperate elements, due to lack of warmth. The most conspicuous changes are the absence of bamboo and the disappearance of Araliaceae (Acanthopanax giraldii and Panax bipinnatifidus, a Ginseng, amongst others) and climbing Actinidiaceae. The high precipitation of the bamboo cloud forest and relatively low evapotranspiration continues into theRhododendron cloud forest belt. This is evident in strong epiphyte growth, especially on shady slopes up to ca. 3500m.
Shady slopes and other sites shielded from solar radiation are covered with snow throughout the winter. Their soils are predominantly shallow terrae fuscae with well-developed organic horizons. The pure Abies faxoniana stands of the bamboo cloud forest extend into the Rhododendron cloud forest belt, now dominating the entire shady slope, albeit with diminished growth (25m/40cm/60%). Their branches are clad in thick moss sleeves. The sub-canopy consists of Betula utilis (10m/35cm/20%), which in some places also occurs, in pure stands. The shrub layer (5m/40%) is completely dominated by rhododendrons (Rhododendron watsonii, Rh.przewalskii, Rh.aganniphum), though Rosa omeiensis, Sorbus koehneana, Lonicera tangutica, and Ribes glaciale are also present. Absence of bamboo provides space for maples. The herbaceous layer, which benefits from the reduced coverage of the above strata, is dominated by sedges (i.e. Carex alpina, per CHEN, 1987), Pedicularis moupinensis, and Rubus pileatus. It overgrows a thin moss layer.
On sunny slopes Picea purpurea is very competitive. Its stands are pervaded with junipers (Sabina convallium and S.saltuaria) dominating the sub-canopy. In deep-soiled sites Abies faxoniana is also competitive with Betula utilis admixed in the sub-canopy. In exposed sites, often with unfavorable pedologic conditions, larch (Larix potaninii) is admixed to Picea purpurea. Larch also pioneers in this belt, i.e. after mass movements or fire. Rhododendrons alone dominate the shrub layer, though with diminished coverage and growth (3-4m).
The subalpine belt (3500-3800m)
At this elevation particularly during growing season there is little fog to attenuate diurnal temperature fluctuations. As a result, the subalpine belt is subject to a markedly worsened climatic water balance. The dominance of juniper forests on the sunny slopes indicates a clear reduction of water supply. Juniper forests typically thrive at an annual precipitation below 600mm (LI, 1993). Restrictions by the Chinese counterpart made it impossible to conduct detailed phyto-sociological and edaphic studies on the subalpine belt.

Shady slopes are affected very differently than sunny slopes by the marked temperature drop and reduced incidence of fog. Shady slopes are covered with pure Abies faxoniana stands extending from lower belts and still blended with Betula utilis in the sub-canopy. The growth and coverage (<50%) of these stands are further reduced as they approach treeline. This and the dissipation of maple are favorable to rhododendrons (4m/80%) which make up the entire shrub layer. The herbaceous layer (90%) is dominated by Cardamine macrophylla, Tiarella polyphylla, and Polygonum viviparum. Epiphyte growth is greatly reduced compared with the cloud forest belt. The distribution of firs and junipers on the Yala Pass (3650m) traces small-scale differences in solar radiation exposure. While northeastern slopes bear a dense cover of rhododendrons overtopped by Abies faxoniana, the Rhododendronundergrowth on east-north-eastern slopes is thinner and overtopped by junipers.