Subtitled photo series showing Caterpillar Fungus (Ophiocordyceps sinensis, Yartsa gunbu) collection and trade in Kham, East Tibet, currently administrated as Ganzi Tibetan Autonomous Prefecture from May 23 to June 3. Also included a bit on the morels we found. Many more and diverse images are shown in my photo gallery. 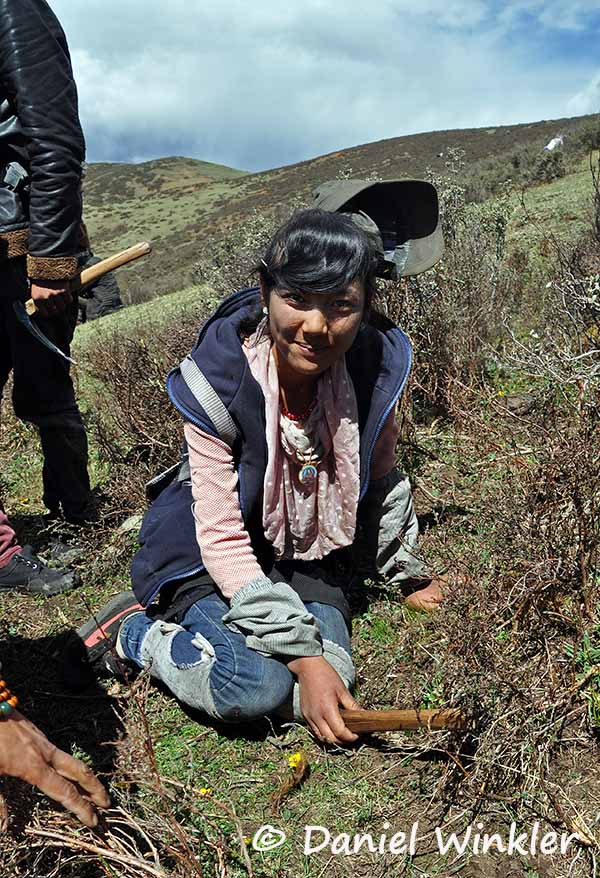 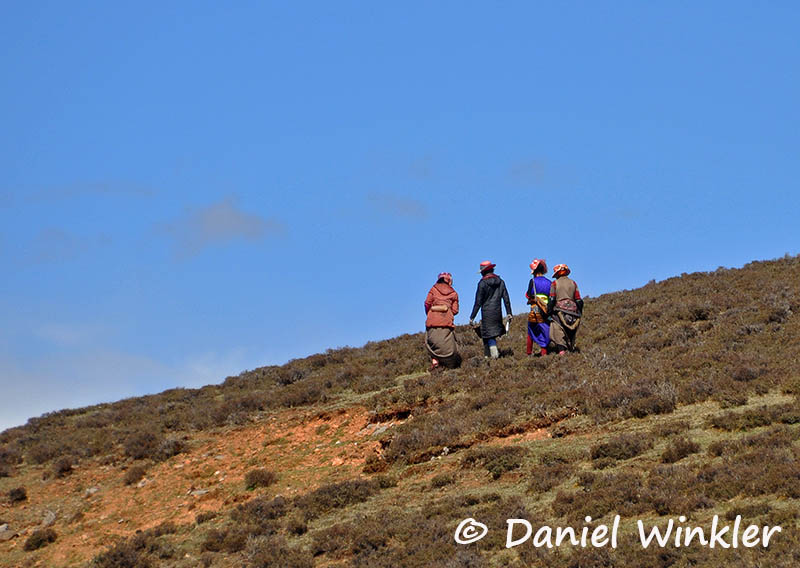 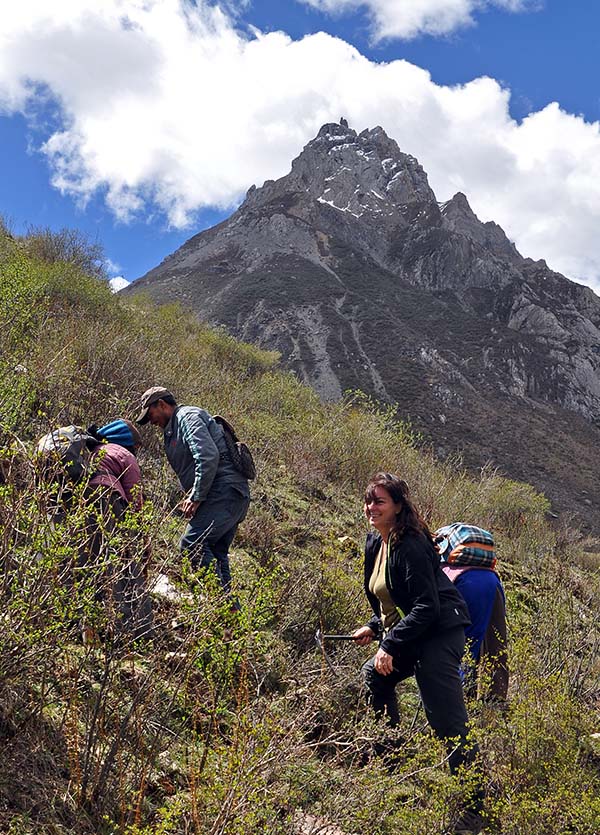 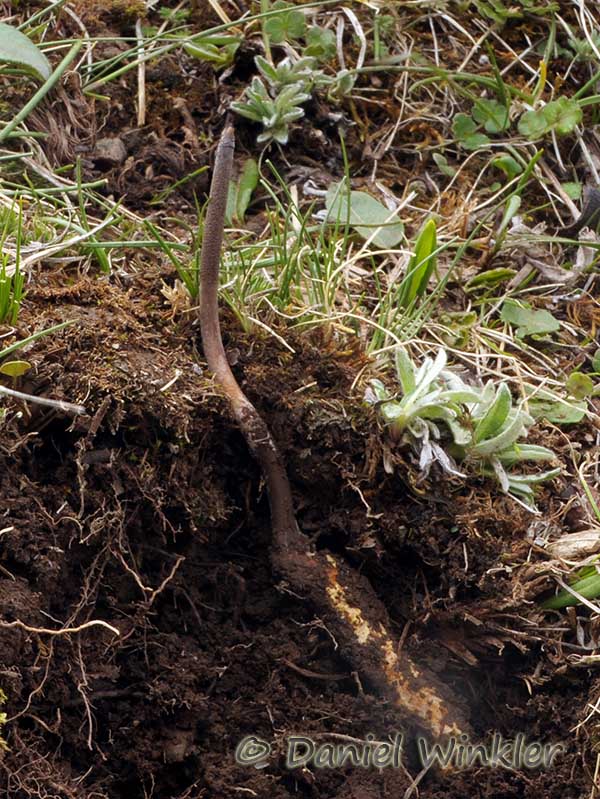 Ophiocordyceps sinensis still in the ground. The ghost moth larva (Thitarodes sp.) is still encapsulated by the mycelium mesh that takes up moisture and possibly nutrients form the surrounding. 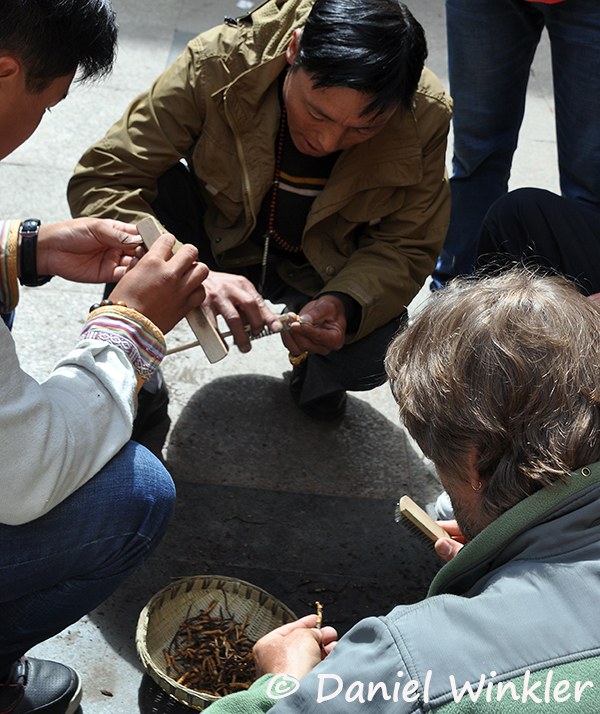 "Bu", as Tibetans refer colloquially brief to Yartsa gunbu needs to be cleaned once dried. The mycelium coating the larva needs to be removed. When dry the peeling is much easier.

Yartsa gunbu market in Ganzi town. Still uncleaned caterpillar fungi are lying on the table. When still uncleaned Yartsa gunbu is priced by piece, weighing does not work due to soil coating that is held together by mycelial hyphae. However, in this stage the moisture content is still high and the larva will have shrunk when fully dried. Thus a lot of experience is necessary to negotiate a good price when buying fresh or partially dried caterpillar fungus. 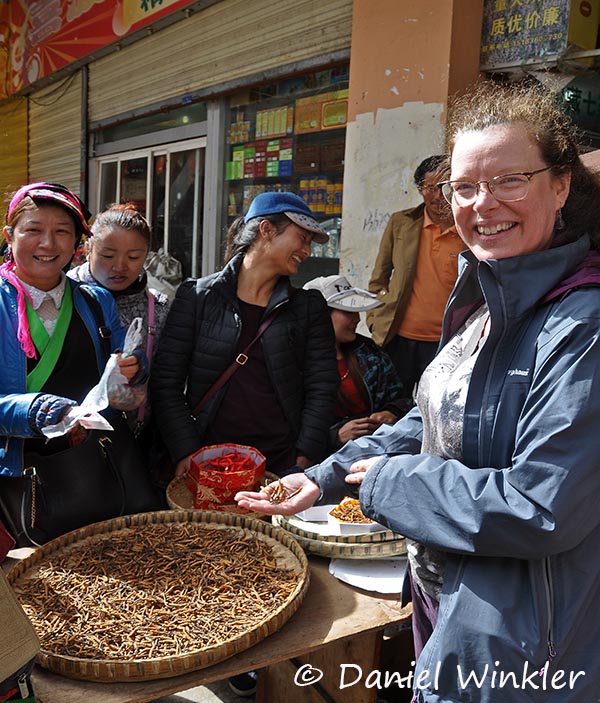 Cornelia buying Yartsa gunbu from Minyak ladies in Dartsendo / Kangding. These ladies were very firm in their price and selection process: no cherry picking, just pick a handful! 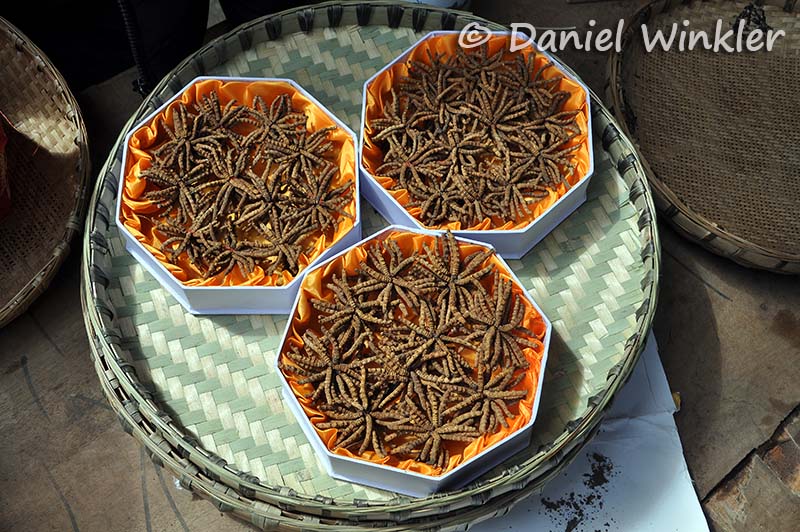 Fully cleaned, sorted by size and tied together to sell in these attractive bundles.

Near Dranggo / Luhuo we drove up an old logging road to a spruce forest were the first morels were fruiting. In Tibetan morels are known as "Khukhu Shamo", the "cuckoo mushroom", since they appear around the same time the beloved cuckoo bird returns to the Highlands from India. I have made a webpage on morels in Tibet, and also written several papers on the ethnomycology of morels and the commercial collection in the Tibetan areas. Here the links to my papers : Morels in Eastern Tibet 2010  and  The Return of the Cuckoo or Morels in Tibet 2007. 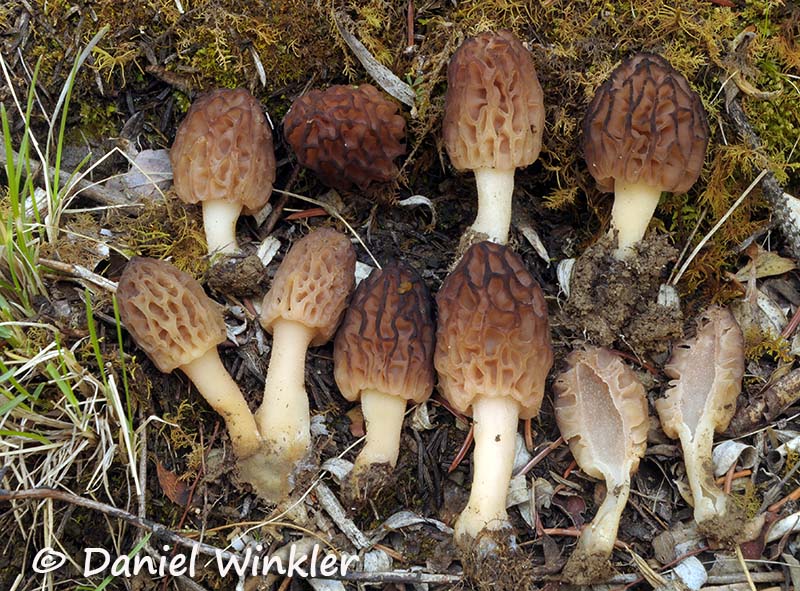 Here an assembly of the still youngish morels. We loved their coloration!

The blade shows centimeters for scale. Hopefully we will get DNA on these specimens, there has been a lot of recent work on Morchella in China, the link will take you a free download of Du et al. 2012. Multigene molecular phylogenetics reveals true morels (Morchella) are especially species-rich in China. 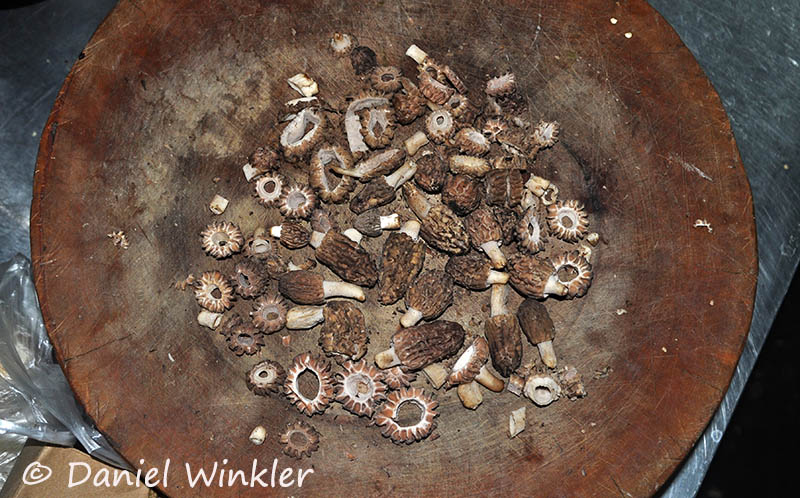 Our morels partially sliced up before cooking! Unfortunately the way the restaurant prepared them did not impress us, they were hardly fried, so we send them back to be on the safe side and they still came back in a very liquid, broth-like sauce. 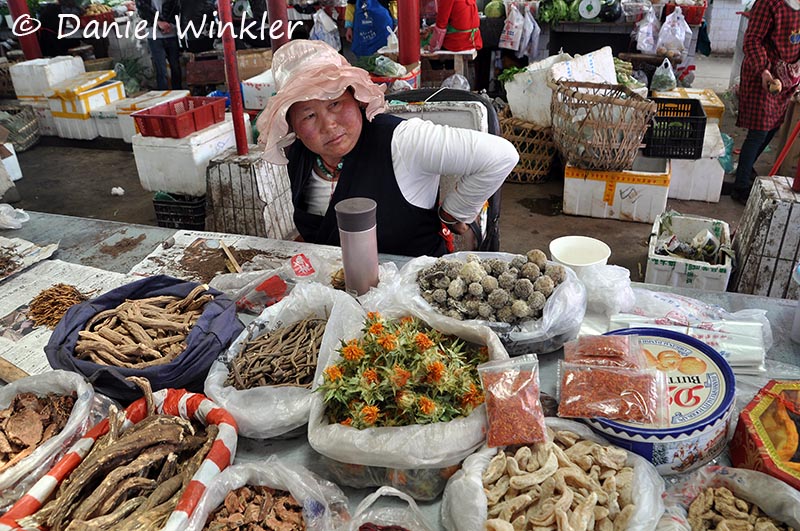 A Tibetan lady selling dome of the favorite Tibetan medicinals at the market in Dranggo, where out of around 50 booths only 2 or 3 were run by local Tibetan merchants.
From left to right Rheum root, above on the newspaper Yartsa gunbu, next to it three kinds of longish medicinal roots, on the bottom center Rhodiola / Rose Root, full center dried. Safflower (Carthamus tinctorius) often used as a cheap saffron replacement in Tibet, back center Saussurea medusa, known in China as Xue lian hua (Snow lotus), and lower left rhizomes of Gastrodia elata, an orchid known in TCM as Tianma, heaven's hemp. 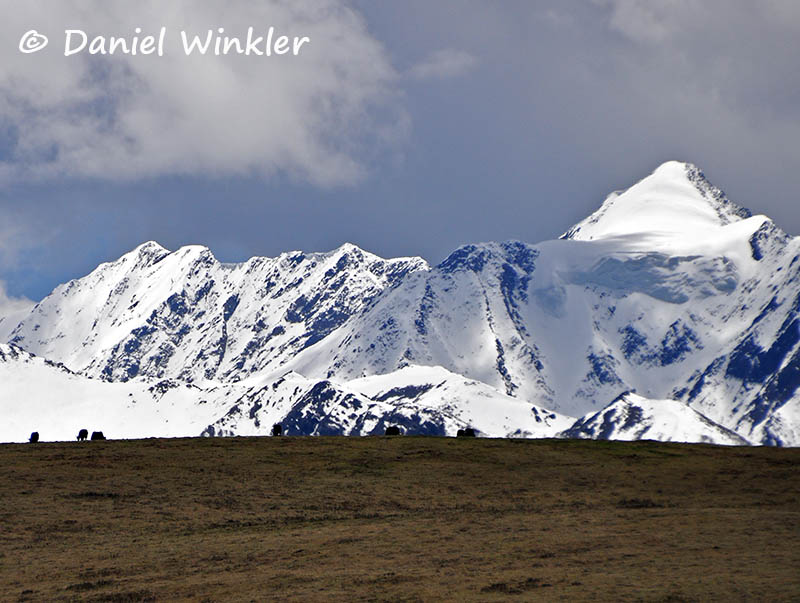 The mighty and sacred Kawalongring Mountain SE of Kandze/ Ganzi.