Cordyceps-diversity in the Amazon Rain Forest is impressive. Down below Cordyceps and allies we found during the February 2013 MushRoaming Bolivia Tour.
All specimens, unless otherwise noted were found in Madidi National Park or close by around Rurrenabaque. They are all deposited in the National Herbarium of Bolivia, La Paz. Special thanks to Tatiana Sanjuan, Bogota for help with identification.  All photos © Daniel Winkler

Close-up of the fertile top of the stroma of Cordyceps scarabeicola. Several fertile cushions, in which perithecioid ascomata are immersed, are growing on top of the stroma.
The superficial to partially immersed perithecia give the fruiting body of C. scarabeicola a much more irregular appearance, which is more common in Cordyceps than in Ophiocordyceps species. 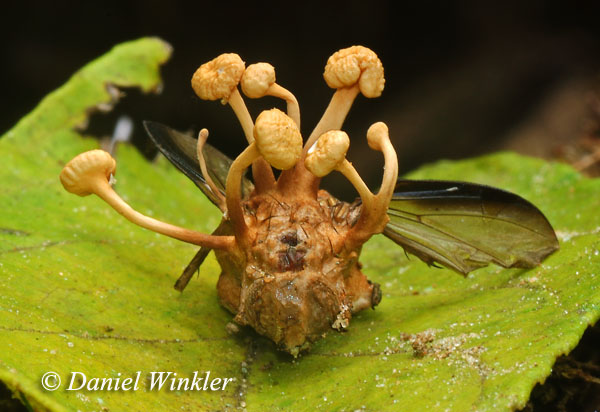 An already dried out specimen of Ophiocordyceps dipterigena. Seven teleomorphic stromata and one slender anamorphic conidiophore are growing from a fly (order Diptera, hence the species epithet) laying on its back.
The anamorph is also described as Hymenostilbe dipterigena. It was found in Mashaquipe, Madidi NP. 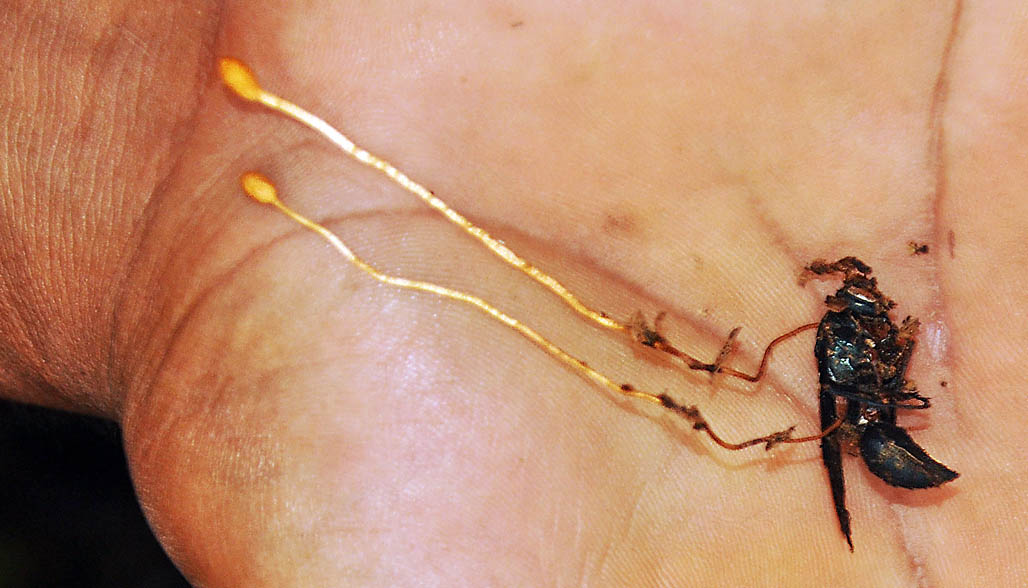 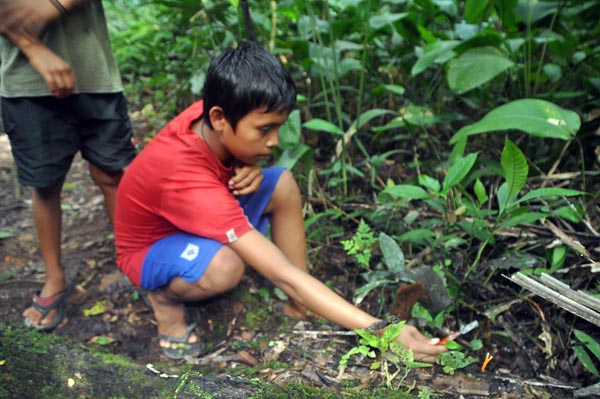 Looking for mushrooms at Wizard Mountain we were accompanied by Fonier and his sons Manuco and Patrick. The boys really got into it!
They found a bunch of Cordyceps, here Patrick looks at a Metacordyceps martialis he found with Larry’s lens, they got to keep in the end.

Nigelia martiale (aka Metacordyceps martialis) growing on a larva of a Coleoptera beetle. This cordyceps clearly has a weakness for the juicy coleopteran larvae that never will get to experience how it feels to transform into a big, well protected rain forest beetle. Coleoptera is largest order in the animal kingdom with more than 350,000 described species. The name is derived from the Greek koleon (κολεον) meaning "sheath" and ptera (πτερα) meaning "wings". Aristotle already called beetles 'koleopteros' (κολεοπτερος) to refer to the front wings modified to protect the membranous hind wings (Coleoptera info from bugguide.net). Already in 2012 we found several of these attractive Metacordyceps martialis at Wizard mountain during Mushroaming Bolivia. 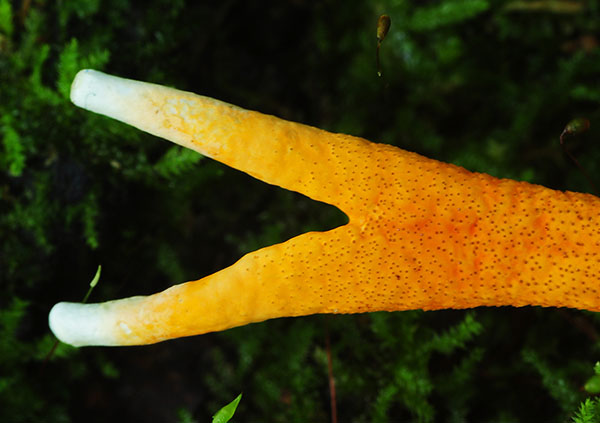 Close-up of the ascoma of Metacordyceps martialis. The fruiting body is still immature and the ascoma with the perithecia is not developed yet. The white top of the stroma is still differentiating. The lower part of the top shows ostioles, future openings through which spores will be released which are produced in the perithecia embedded in the ascoma.

Metacordyceps (Clavacipitaceae) as a genus is still not well established, Kegler et al. (2011) wrote in their paper on Metacordyceps: “Metacordyceps remains one of the most poorly understood”. However, “Anamorph genera Metarhizium and Pochonia were found to be associated only with Metacordyceps and demonstrated to be phylogenetically informative for the clade”. 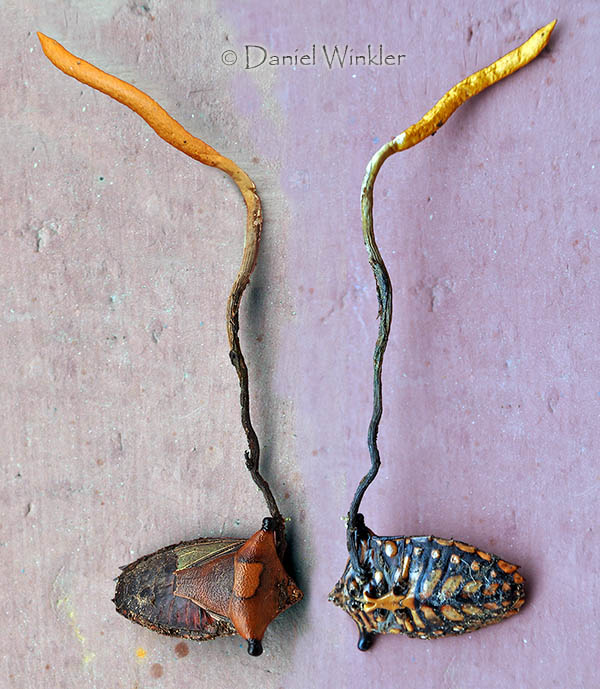 The same specimen of Ophiocordyceps nutans showing top and bottom of a Shield or Stink bug (Pentatomidae, Heteroptera) 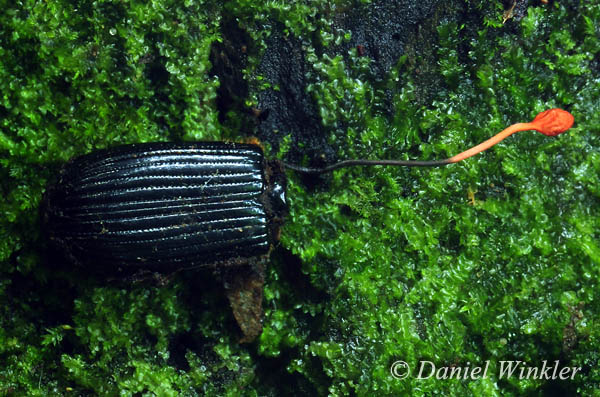 Ophiocordyceps curculionum is specialized in attacking weevils. It is closely related to Ophiocordyceps australis, which attacks ants.

Ophiocordyceps australis growing out of an ant with three tall immature stromata and a forth smaller immature branching off below a mature, pin-head shaped ascoma. 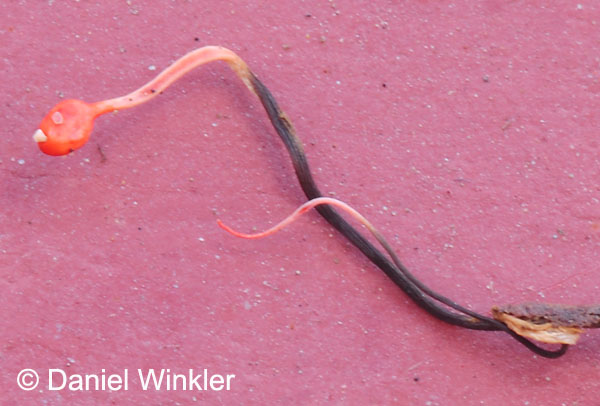 Close up of mature and immature stromata. 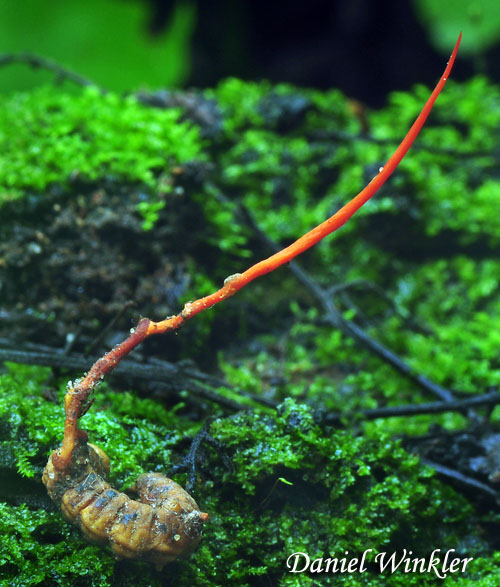 A Cordyceps growing on a Coleopteran larva, of which only a part was successfully unearthed. 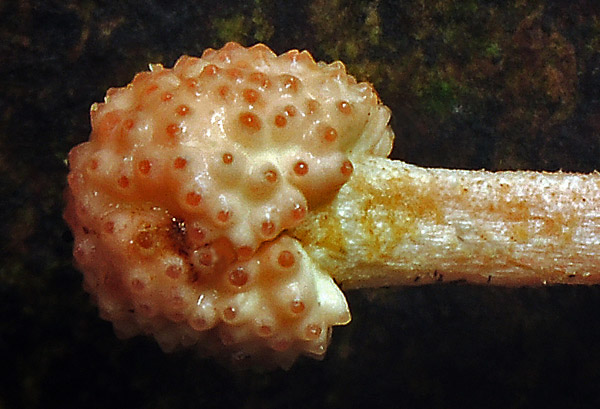