in the Tibetan Prefectures of West Sichuan

Summary:
The mountainous southeast of the Tibetan Highland contains China's greatest forest resources, highly diverse coniferous forests dominated by a wide variety of spruces, firs, pines and junipers. Although a lot of valuable forestry research has been carried out, the mostly state controlled forest economy is extracting timber at losses far beyond a sustainable yield. Forests are being reduced at an alarming rate, figures point to over 50% forest reduction in West-Sichuan in only 40 years. Throughout the millennia substantial deforestation has already been caused by man and his grazing animals.
Introduction
The rugged southeastern Tibetan Plateau is deeply disected by the gorges of Tsangpo, Salween, Mekong, Yangtze, Yarlong and their tributaries. Valley floors are generally between 2000 to 4000 m asl. Towering above are mountain peaks usually over 5000 m, the highest being Namche Barwa (Namjagbarwa 7651m), Kawakarpo (Meili Shan 6809m) and Minyak Gongkar (Gongga Shan 7590 m). The steep valley slopes are mostly clad by magnificent coniferous forest. Eastern Tibet contains China's greatest forest resources. The indigenous Tibetan population refers to the region as Kham. Presently it is divided into several administrative units:  Nyingchi (Linzhi) and Qamdo Prefectures of SE-Xizang (Tibet  Autonomous Region), NW-Yunnan's Deqen Tibetan Autonomous Prefecture (TAP) and W-Sichuan's Aba (Ngawa) and Ganzi (Kandze) TAPs, the latter two being the focus of this paper.
The most striking feature of the region is the high diversity of geoecological factors. Extremely rugged terrain and great differences in altitude support a wide range of ecosystems. While the outer fringe is under a maritime climate, the interior plateau is under a more continental regime. Precipitation, just as biomass and biodiversity, declines from the southeast to the northwest. More than 80% of the annual precipitation falls between May and September, transported into the region by the summer monsoon. The core of Eastern Tibet receives an annual precipitation of 600 to 800 mm. The slopes of the fringe receive above 1200 mm. Valley floors are often dryer due to local wind systems receiving 400 to 700 mm/A.  The Westerlies dominate during cold and dry winters, monthly precipitation rarely exceeding 15mm. Only north-facing slopes have a lasting snow cover, snow on south slopes melts within a few days due to intense insolation. There is a considerable rise of the altitudinal belts from the fringe to the plateau due to the rise of the surface itself. Thus on the outer fringe treeline is at 3600 m, while in the interior of the plateau (i.e.. around Dzogchen) forests climb up to 4700 m asl., constituting the highest coniferous treeline in the world.
The southeastern highland is unequaled in the Holoarctic in biodiversity. Wilson, one of the many plant-hunters who scoured the region for horticultural plants, wrote "the wealth of flowers [..] is astonishing and surpasses the dreams of the most sanguine" (1913:1). Rhododendron alone has several hundred species. Each genus of Primula, Gentiana, Clematis, Pedicularis, Corydalis, Sedum, Saxifraga and Senecio has more than 100 species; in addition Wang (1961:32) listed 52 different conifer species for the southeastern highland. In Jiuzhaigou alone the author recorded 16 species, others 24 (Winkler 1994). Yang (1985) reports 80 forest formations and 250 forest types in W-Sichuan's mountain forests. The main forest types of Jiuzhaigou (see Winkler 1994, 1997/98b) and of Sichuan's Tibetan prefectures (based on Li 1993) will be described briefly (see fig. 1, 2 & 3).
Map of the Southeastern Tibetan Plateau and adjacent regions. In the hatched area subalpine forests are distributed primarily on the north-facing slopes; south-facing slopes are mostly forest-free grazing grounds. To the northwest of the hatched area forests are presently almost absent. 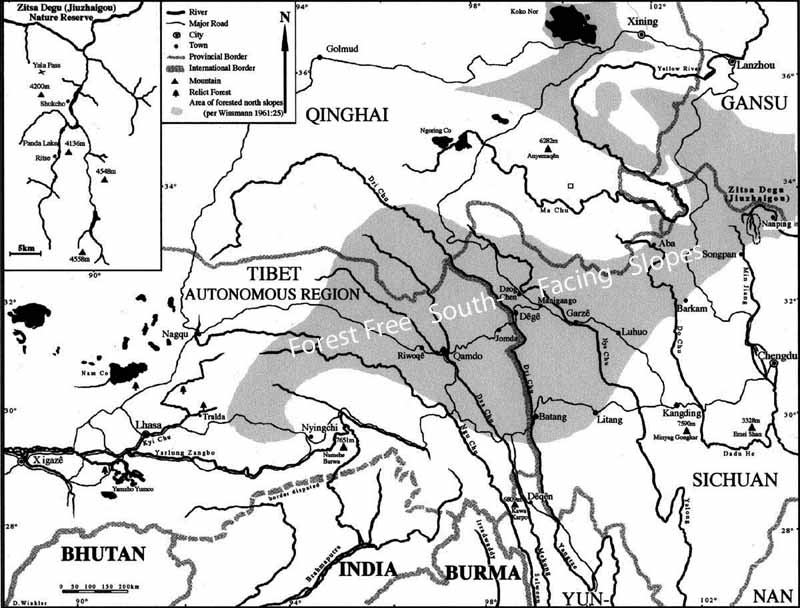 The main forest types
Presently pine-oak forests (photo 1) dominate the lower slopes of Jiuzhai valley  between 2000-2400 m, and on south-facing slopes up to 2600 m. The area of distribution is influenced by dry local winds and receives about 700 mm/a precipitation. Valley floors have been cleared for cultivation of maize, barley, wheat and broad bean. Barely a trace remains in Jiuzhaigou of the original Hemlock- (Tsuga chinensis ) mixed forest, which consists of a variety of conifers (Abies ernestii, Picea wilsonii, Pinus armandii) and deciduous trees. The present pine-oak forests (Pinus tabulaeformis, Quercus aliena)  are of secondary nature as a result of human impact and fire. Many of the deciduous oaks (Quercus aliena)  around the villages are managed in coppice systems or their branches are being lopped. Locals extract timber by selective cutting. Pine forests are prone to fires of low intensity. Evidence of recurring fires is abundant in this altitude and on south facing slopes in general (see Winkler 1998b). In Jiuzhaigou evergreen oaks (Q.baronnii)  are only found in the warmest sites, yet in the wider region sclerophyllous oaks are widely distributed on south-facing slopes.
Pine forests (i.e.. P. densata, P. armandii) reaching up to 3800 m are common all over Eastern Tibet, although they never reach as high as the upper treeline. Growing stock varies between 100-400 m3/hA.  Pines are most competitive in dry, sun-exposed sites with a mean annual temperature of 4-10°C. Hemlocks (i.e.. Tsuga chinensis, T.dumosa) are important constituents of coniferous-mixed forest along the fringe. They climb up to 3200 m in moist warm sites with an maritime climate.
In Jiuzhaigou subalpine spruce-fir forests dominate the cloud forest belt (precipitation 1000 mm/a) from 2700 m to 3500 m (photo 2). Abies faxoniana thrives in moist and mesic sites. In mesic sites spruces (Picea wilsonii, P. asperata, P. purpurea) can compete successfully. In dry sites fir and spruces often give way to serial larch (Larix potaninii) and junipers. In the lower range conifers grow up to 50 m (dbh: 80 cm); with increasing altitude growth is significantly reduced (A. faxoniana in 3500 m: 25m, 40 cm).The canopy closure of the multi-layered forest is dense. In the secondary canopy there is often an admixture of birches (Betula albo-sinensis, B. utilis), which establish themselves quickly in gaps. A tertiary canopy consists of small deciduous trees (Acer, Tilia ). From 2700 m to 3200 m the shrub layer is dominated by highly competitive bamboo (here: Fargesia nitida), above it by Rhododendron. Between 3200 m and treeline (3800 m) pure stands of Abies faxoniana  (canopy closure 60%) with Betula utilis in the subcanopy clad all northern exposed slopes.
Spruce-fir forests are the dominant forests in mesic and moist sites of the subalpine forest belt (3000-4600 m) of Eastern Tibet. They are the most important forestry resource containing over 60% of the standing timber volume. They usually receive more than 700 mm/a precipitation with an average temperature between 2-8°C. Standing timber volume varies from 350-1200 m3/hA.  Fir forests (i.e.. A. faxoniana, A. squamata, A. georgii) are usually less productive and more seriously affected by diseases than spruce forests (i.e.. P. likiangensis, P. balfouriana). Forest fires occur rarely in the subalpine belt, but when they occur they have a devastating impact.
Larch stands usually indicate recent areas of heavy disturbance such as landslides or fire. Being a heliophilous pioneer species larch occurs on exposed sites often associated with juniper and spruce. In addition Larix  potaninii forms forests in the upper treeline on south-facing slopes.
Only a few stands of junipers (canopy closure <50%, height: 12m, dbh: 40 cm) with a dense graminoid groundcover remain on south-facing slopes above the cloud forest belt (3500 m) up to treeline (3800 m). Most potentially juniper forested slopes are now pastures (see below) in Jiuzhaigou.
Juniper stands (i.e.. Sabina tibetica, S. saltuaria, S. komarovii, S. convallium) dominate south-facing slopes between 3400-4400 m (mean annual temperature close to 0°C). The slow growing junipers are well adapted to cold and extreme diurnal range of temperature and high insolation. They form the transition zone between spruce-fir forests and scrub vegetation and grasslands. In continental areas with only 400-600 mm/a precipitation they grow in all exposures. In Central Tibet there are a few sacred stands of impressive juniper trees left on north-facing slopes around monasteries (i.e.. Reting, Nagarze). They document former forest growth in this otherwise fully deforested areA.
Figure 1: Spatial zonation of Jiuzhaigou's (Zitsa Degu) forest vegetation 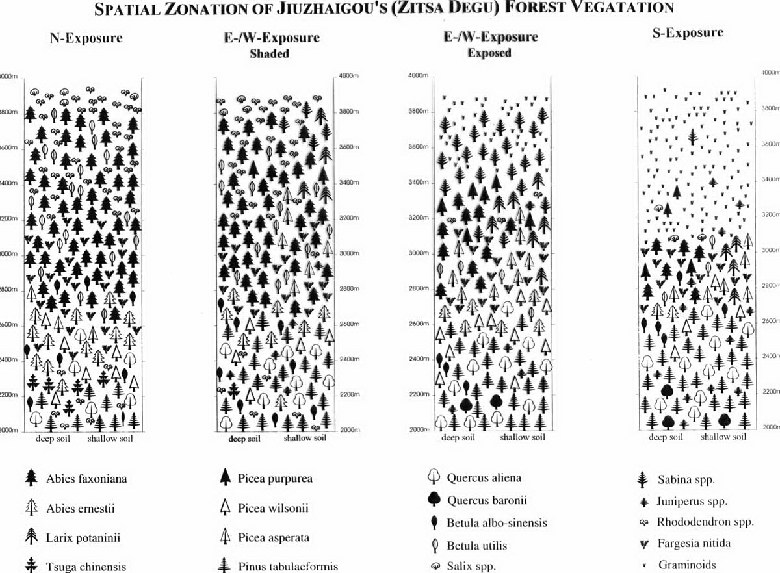 Link to more detailed study on the vegetation of Jiu zhai gou
Much of the former juniper and some of the spruce-fir forests have disappeared completely and their sites are now yak pastures. Deforestation in Eastern Tibet is documented by pollen-analysis as far back as 5100 years ago, intensifying 2000 years ago; in many locations forest soils are found under present steppe-soils (Frenzel 1995). Very striking is the common phenomenon of forest free south-facing slopes in otherwise forested areas (see map, photos 2,3,5). Previously the absence of forests on the south-facing slopes, which are never snow covered for more than a few days, had been attributed by nearly all explorers to climatic conditions. However research in Jiuzhaigou (Winkler 1994, 1997, 1998) has shown that grazing and burning are the primary causes for continued absence of forests on south-facing slopes.
Deforestation in the past shows a clear pattern in developing Eastern Tibet as a grazing land. Though summer pastures above treeline used to be abundant, winter grazing grounds were limited due to the prevalence of forests in lower altitudes. Creating winter pastures through burning or using burned south-facing slopes enabled a larger herd to survive. In addition intruding yaks disturb and may prevent forest regeneration. All of this resulted in extensively replacing forest areas by grasslands, a process which has been dramatically accelerated since the 1950s by extensive logging.
Figure 3: Ecograms of the main forest types of Jiuzhaigou