Here a few images taken during Mushroaming Bolivia in February 2017 in Madidi National Park.
There is another blog entry for the "Amazon Fungi Late Night Show" that shows bioluminescent, stinkhorns and UV light lichens. ENJOY!! Annulohypxylon sp., a member of the Xylariaceae. This patch has a diameter of about 5cm, thus the central structure showing the perithecia is easily overseen unless one looks out for these otherwise boring looking black spots on fallen branches and trees. A group of very young Clitocybula azurea. With age the blue color of these shade loving wood decayers looses intensity. Clavulinopsis fusiformis, the Golden Spindles. A gracious mushrooms always fun to find, but often encountered with disappointment, since the first thought when seeing them from the distance is "Cordyceps!", which they are not, but still cool.

What a cool slime mold! These green lampshades are just awesome! Check out the odd stem structure of these branching Horsehair Parachutes. In the past they would have been close to Marasmius androsaceus, which now is Gymnopus androsaceus. Well, what do we have here? Xeromphelina tenuipes is quickly invoked due to the hairy "slender-foot" (=tenuipes) and the big, but thin yellow caps. However, we found three distinct mushrooms that look very similar, all growing on dead wood A clear difference beside tones of red and brown in the yellow caps was the different amount of lamelullas, the gills that do not reach all the way from the cap edge to the center.

What colors and what a cool structure. Probably Metacordyceps martialis (=Metarhizium martialis) on scarab or dung beetle. Found by Kathy Macbride at Cero de Brujo near Rurrenabaque.
I will publish a special Cordyceps page on my Cordyceps-blog. Tatiana and I found 45 species of Cordyceps this trip! Several of them pretty sure new to science! Ophiocordyceps unilateralis group, the Zombie ant. A tiny ant with a big fungus growing from its neck.

Marasmius haematocephalus, the Mauve Pinwheel. I can not help myself but have to take a dozen picture sof this mushrooms each time in the rain forest.

Polyporus udus, a big (up to 20cm) softish polypore, that looks a bit like a bolete and also taste a bit like boletes! One of the best edibles I found so far in the Amazon, but I have not eaten more than maybe a dozen of Amazon mushrooms species. There is enough adventure to be had in the forest, and really no point going out on a  dangerous culinary limp. Polyporus udus is always growing from dead wood, often relatively fresh fallen trees, whose big branches are still attached to the trunk. To my knowledge there are no look a-likes of this size and and with such a soft, like water-logged texture. Actually "udus" is Latin and means "wet".

A Fungus beetle feeding on its favorite food as its name suggests!

Not sure what I shot there. Seeing it a leaf it was cool, glad it did not land on exposed skin of mine, that blood red color reminds me of blood I donated to plenty of thirsty bugs in the rainforest, though this insect is probably harmless. 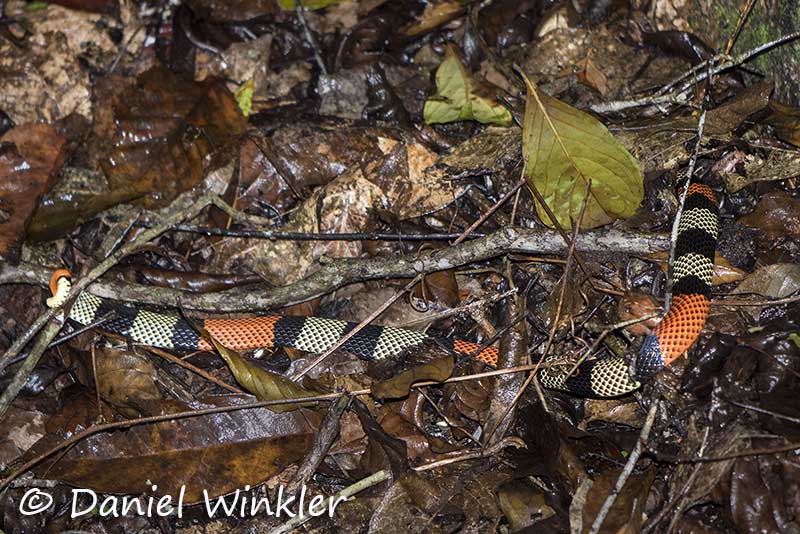 Not so harmless is this Coral Snake, probably a "South American Coral Snake" (Micrurus lemniscatus), which is deadly poisonous, but luckily not aggressive at all. When humans approach this snake digs its head underground and shows his body as warning.

All the cuter animals such as monkeys, peccaries, tapirs, hoatzins, macaws etc. will appear here later.