While it is much more comfy to stay in your mosquito secured quarters during the night in the Amazon, you are missing out on all kinds of very impressive sights. Down below my favorites from the February 2017 Mushroaming Bolivia trip. All the photos were taken in Chalalan Eco-lodge (unless noted) located in the incredible Madidi National Park. There is another blog entry for The best of the Day encounters. ENJOY 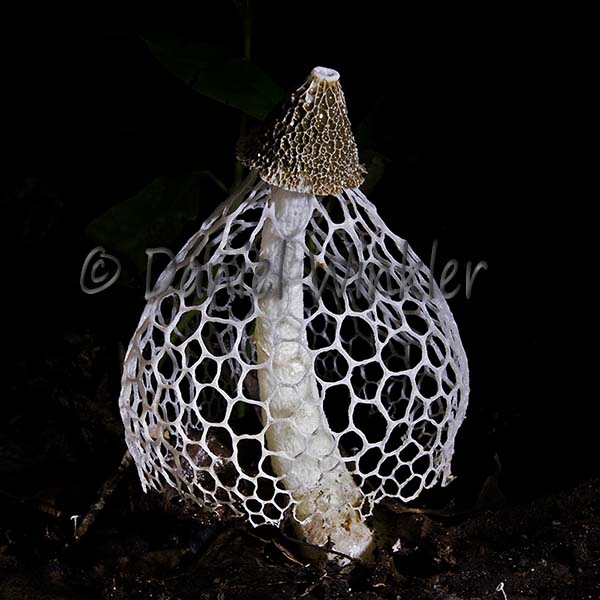 Phallus indusiatus, the "Veiled stinkhorn", but I like to refer to it as the "Cross-dressing stinkhorn".
Usually we small it before we see it. It fruits only in the dark, in the morning most are laying flaccid on the ground. During our night walks we keep sniffing for it and once we smell one we have good chance of finding it, but it sometime stakes as 10 min to locate it, and sometimes we give up. 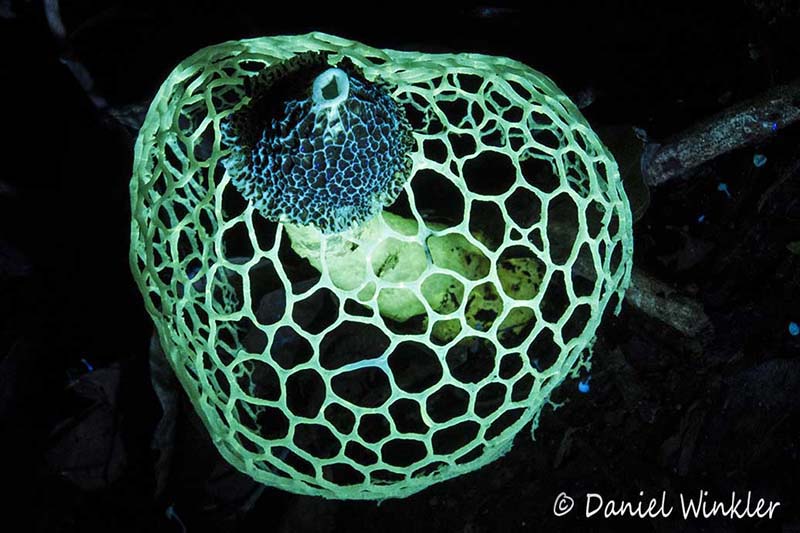 Phallus indusiatus seen from above with UV light. Not that such a cool mushroom need such a gimmick, but still nicely spooky. And since you can not smell its impressive odor that its oozes out to attract feces and cadaver loving insects, we have to settle for optic tricks. Anyway the odor is much closer to moth balls, not pleasant for sure, but nowhere near to feces, but intense for sure! 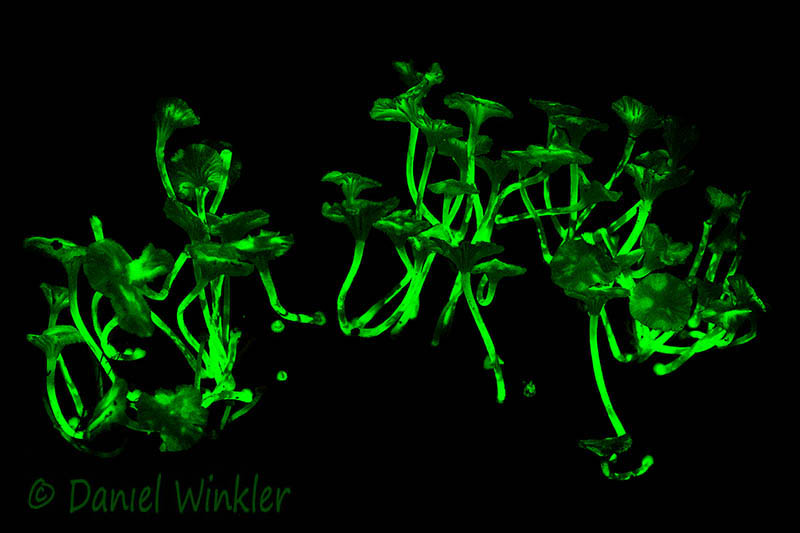 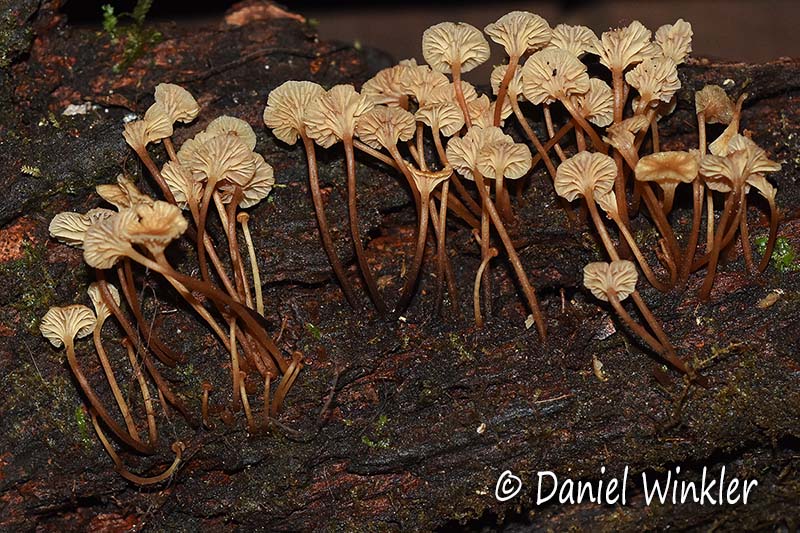 The same group of Gerronema seen with a flash after I had removed a few broken mushrooms. Seen in Madidi Jungle Lodge

We found a fallen tree covered by hundreds of Gerronema viridilucens. At this point I was not sure if these were bioluminescent, but that abundant fruiting alone caught my eye. 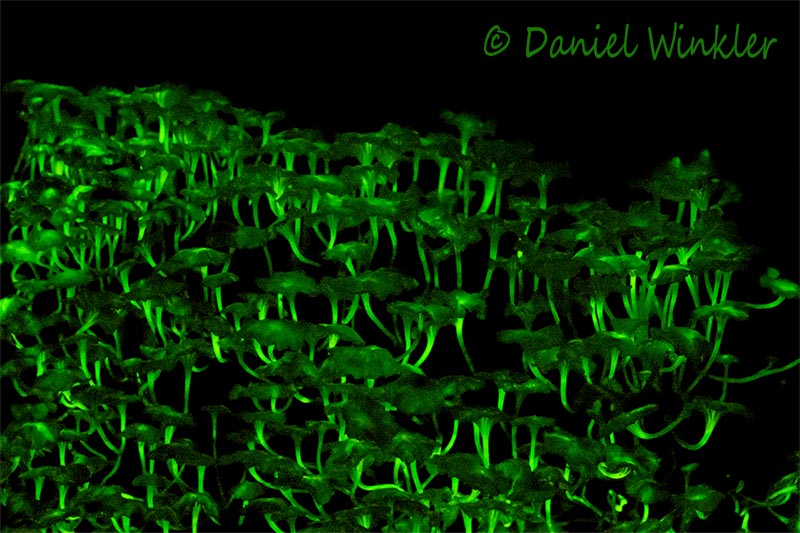 At night the whole trunk was lit up. At first I thought there was a beam of moonshine. What a sight!  It was an awesome experience sharing this sight with our native guides, who explore the rainforest every day, but had no idea that these mushrooms were glowing at night. It really blew their minds.
The light was less powerful than what bioluminescent Mycena chlorophos emanated in Japan (see previous entry). Taking a picture was a challenge. I am not really happy with my image, but it was the best I could take. It was exposed for nearly 7 minutes, nearly 15 times longer than what it took for M. chlorophos. In addition, my camera took another 5 minutes before it was done processing the image. So 4 images per hour is pretty pathetic, especially when you are standing alone at night in the rainforest while being swarmed by blood sucking insects and all kinds of creepy critters on the move, such as bullet ants. 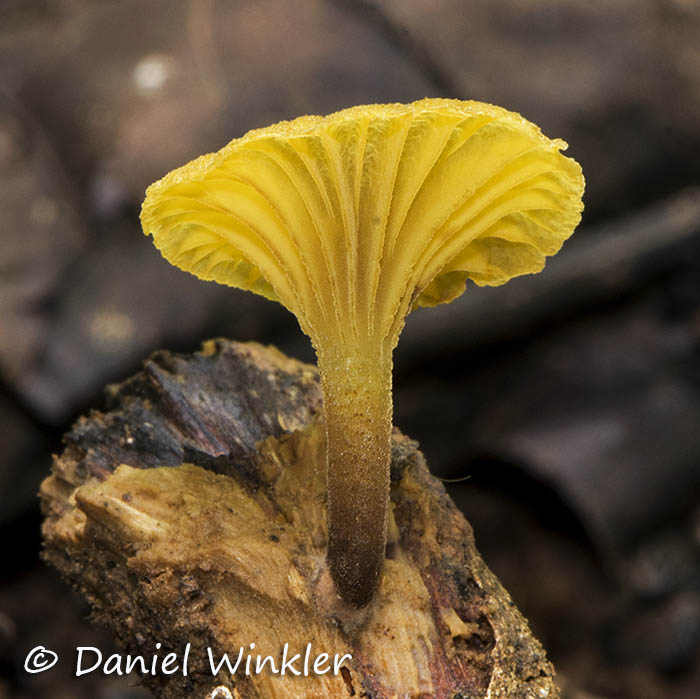 Another beautiful Gerronema sp., most likely not bioluminescent.

A cicada just emerging. I love the rainbow of colors! 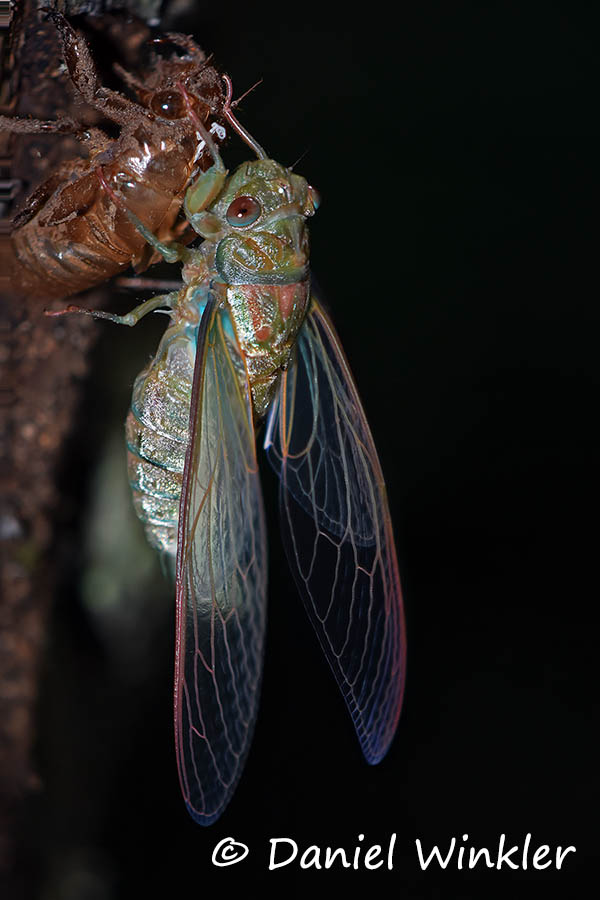 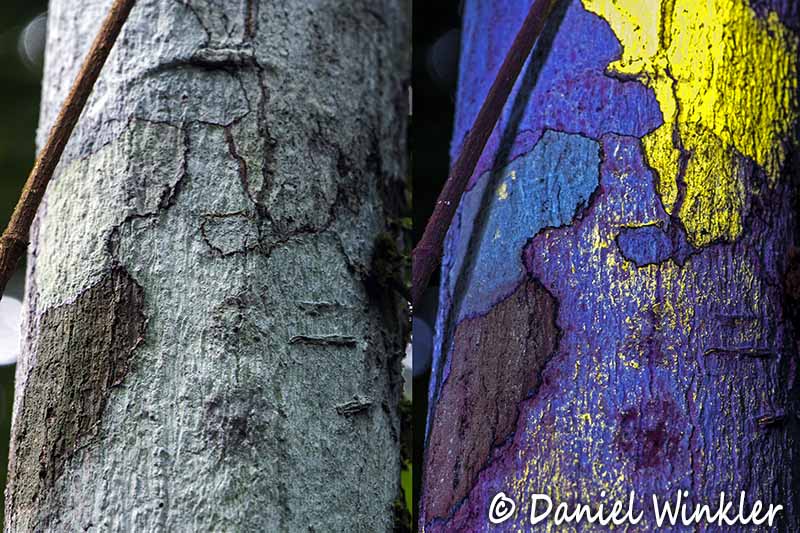 These lichens display incredible colors when exposed to UV light. The left image photographed with a flash shows the same lichens as the image on the right, which is lit up by UV light. But not every UV light will do. You need a frequency below 370 nm (= nano meters).  Most regular UV lights do nothing, as I learned in 2015 when these barks remained more or less gray... 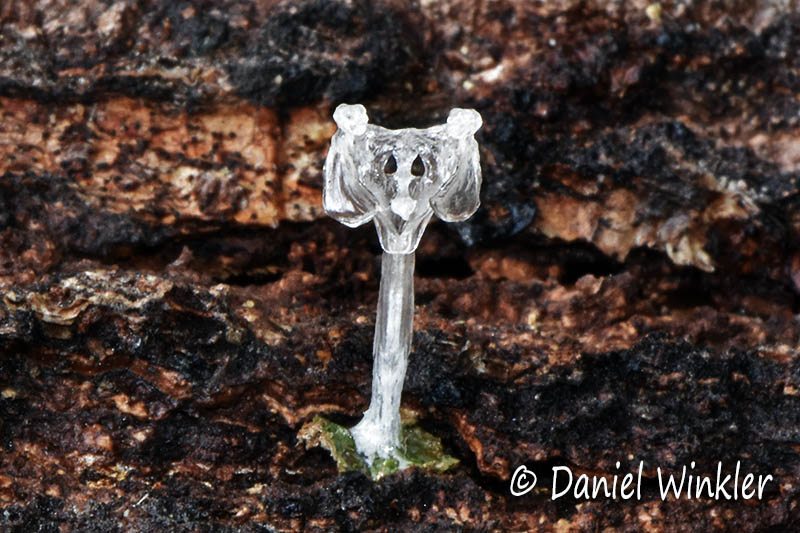 Not really a creature of the night, but this translucent alien-looking orchid flower fits the theme. Originally this tiny flower (less than 1.5 cm / 1/2 in) was growing on a moss covered fallen tree, you still can see the moss on its base, but we collected it and I posed it for a picture.