During the 2015 NAMA Foray in late September in Asheville, North Carolina, I ran into some nice Cordyceps specimens although the forests were quite parched. I was lucky that Todd Elliott showed me around and his friend Armin Weise took me to a forest that had above average moisture and we found 7 Cordyceps specimens of 3 different species within an hour! Included are a few more Cordyceps specimens from South Carolina a few days earlier I found with Tradd and Olga Cotter from Mushroom Mountain. I also uploaded my favorite photos of "regular" mushrooms from that trip on my Mushroaming blog.

Most common was Ophiocordyceps sphecocephala, the Wasp Cordyceps 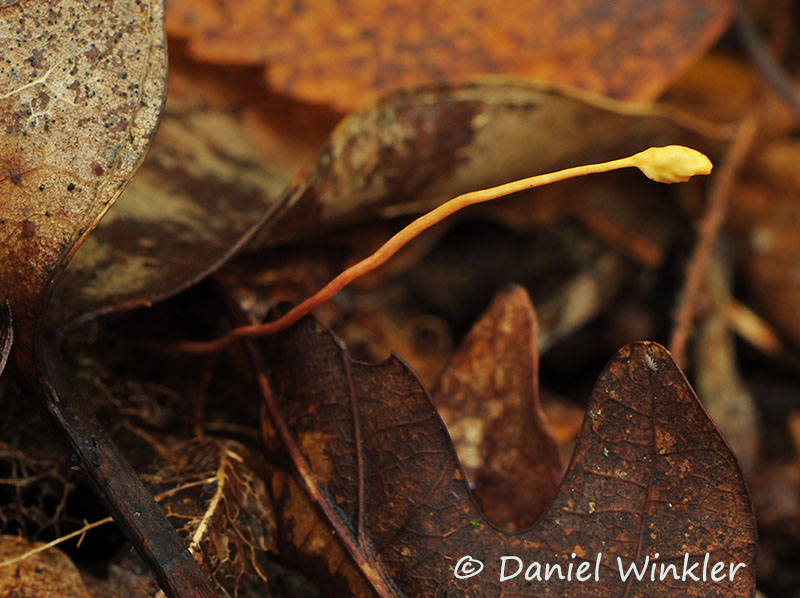 Fruiting body of Ophiocordyceps sphecocephala growing from between leaves on the ground. Luckily it is bright yellow. If the stroma was brown, it would be next to impossible to find this elusive tiny fungi. 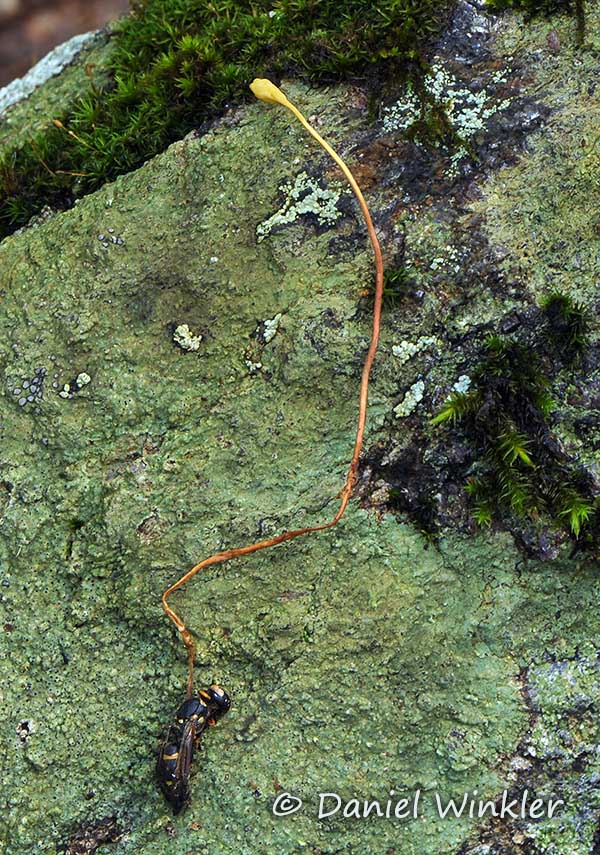 Here the carefully dug out insect-fungus complex. The stroma is so long since the leaf litter was so deep. 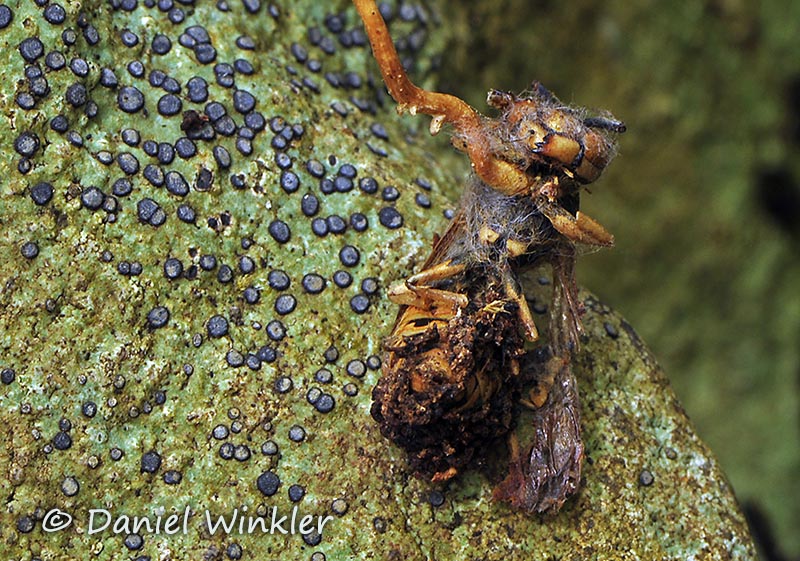 Close up of the dead wasp. Inside is only mycelium of Ophiocordyceps sphecocephala left. The fungus probably leaves the exoskeleton in good shape to protect itself from other parasites while digesting the wasp. 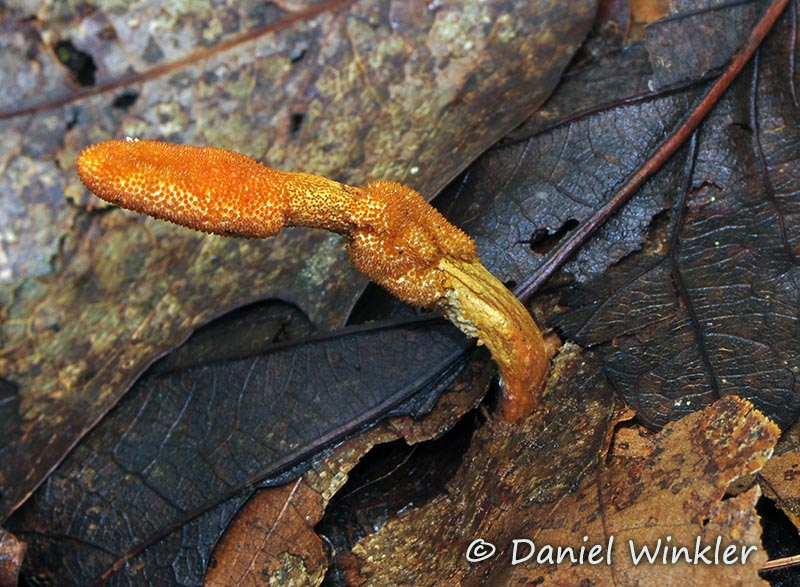 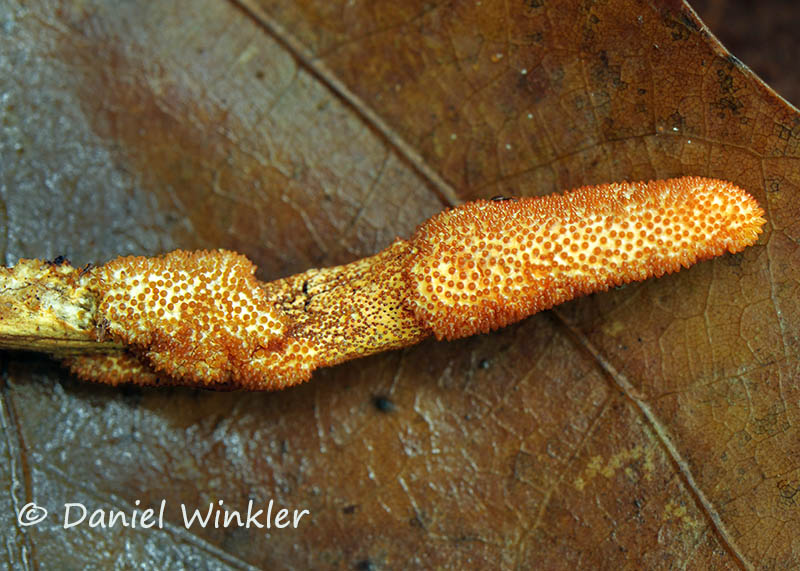 It seems like something broke the immature stroma and thus the perithecia only developed in non-impacted areas. 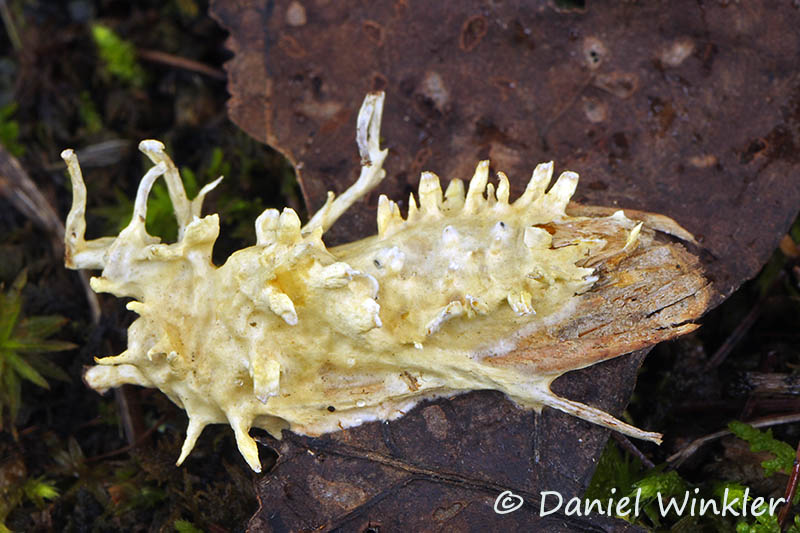 The stroma of Elaphocordyceps capitata, recently renamed to Tolypocladium capitata. 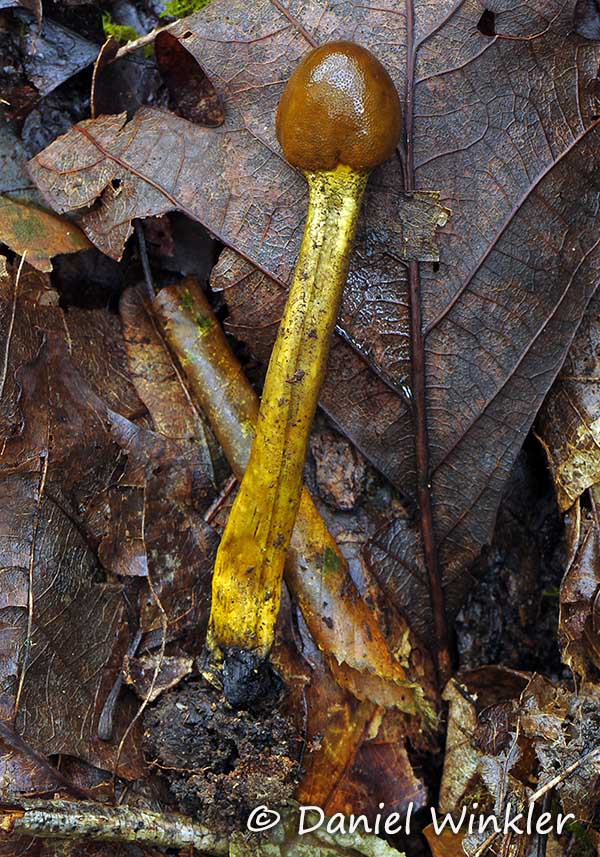 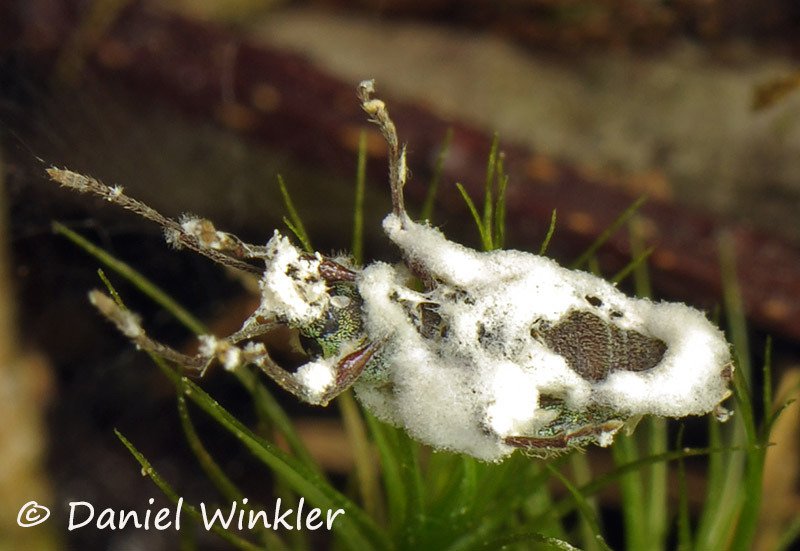 Some entomophagous fungus, could be anything from a Beauveria to a Paecilomyces seen near Asheville.

Ophiocordyceps stylophora is a tiny Cordyceps that is easily overseen. Todd Elliot, an expert on Southeastern North American Cordyceps, showed me this specimen in his backyard. Todd thinks it is very under reported, primarily because of its small size, dull color, and infrequent maturation.

The same immature Ophiocordyceps stylophora dug out. It's stroma is growing out of a tiny coleopteran larva. 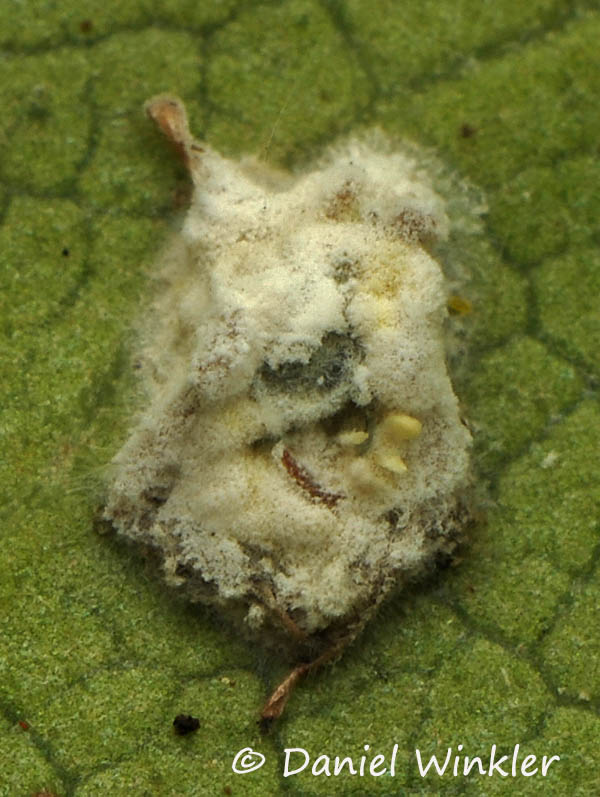 And another entomophagous fungus found near Asheville. It could be an anamorph, but the more yellow tissue in the middle could be part of maturing perithecia. 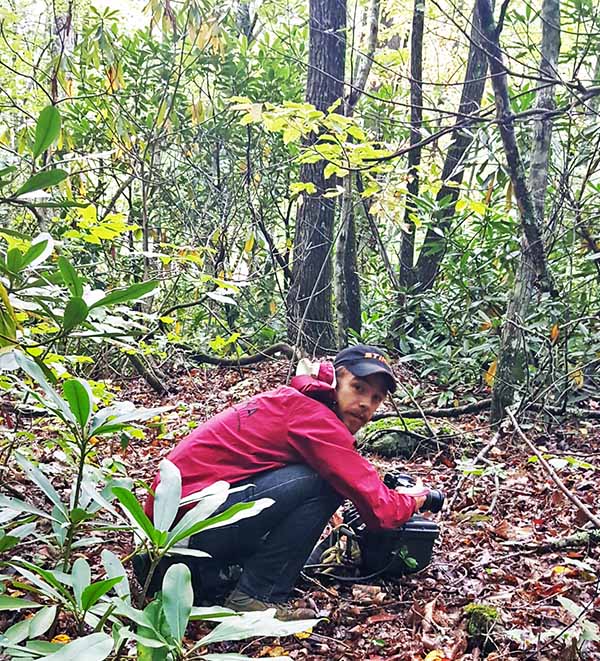 Armin Weise taking pictures of a Cordyceps in the woods near Asheville NC. 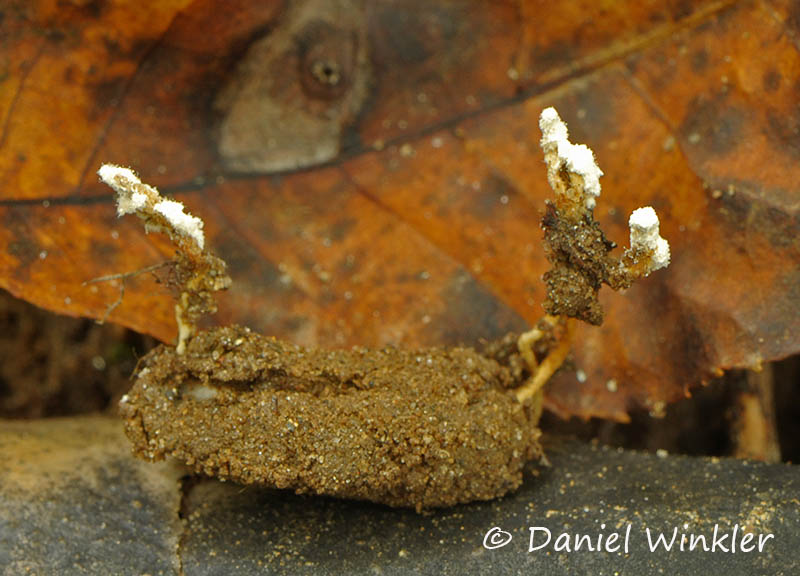 An Isaria sp., a Cordyceps anamorph growing from a pupa seen in Isaqueena SC 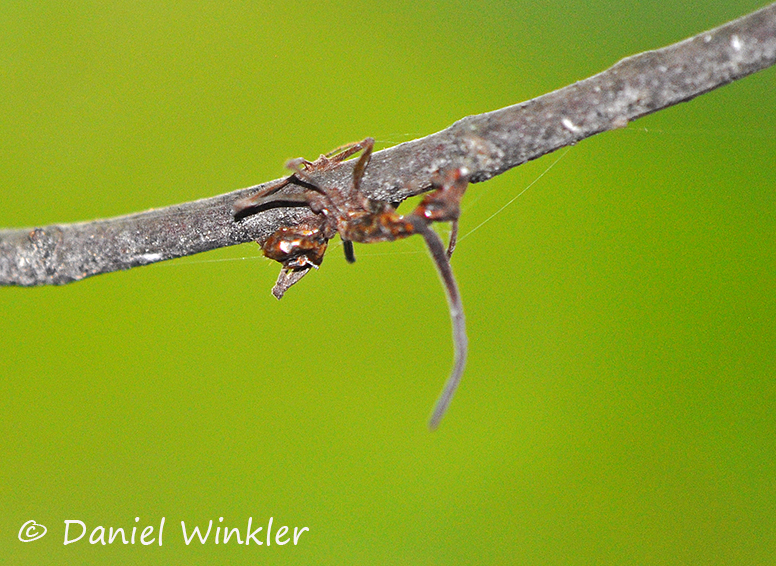 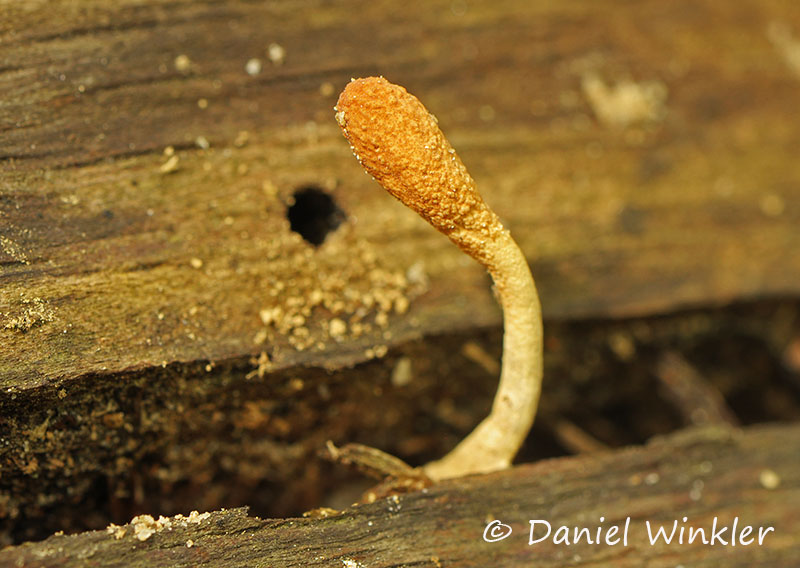 I was all excited seeing a new species of Cordyceps, but alas no insect on the base, just mycelium in wood, thus no Cordyceps and probably Podostroma alutaceum.

Other fungal highlights from the Carolinas trip as this stinkhorn below  are published on my Mushroaming blog. 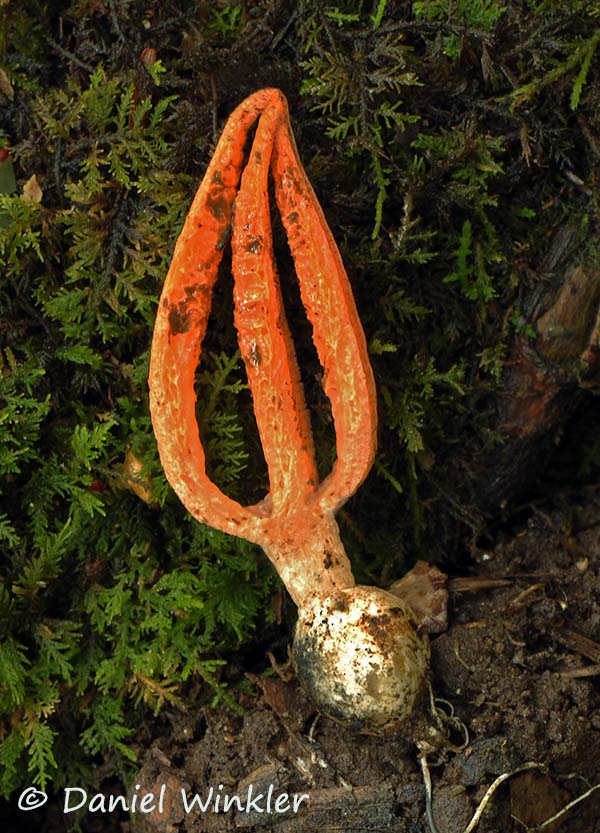